The Past Year in Reading

I started 29 books this year, finished 27 of them. This sounds really lightweight considering some of the book blogs that I have read today…where people have read anywhere from 100 to 200 books in the past year. I am feeling good about averaging over 2 books a month! In my defense, however, I do feel like I read some really BIG (long) books. I am gearing up for a great 2009 for reading. My official plan is to retire at the end of May, so let the reading begin!

I read the last 4 Harry Potter books. I am not including them in my Top favorites list, because they are just a given!

22 of the books I read this past year were written by women, 7 by men; I find that interesting, but not surprising. However, 2 of the men made my Top lists.

And the runner-ups are:

No Country for Old Men-Cormac McCarthy

Those Who Save Us-Jenna Blough

I have quite a list already of books that I would like to read in 2009. However, I am not into commitments right now, so we will just have to wait and see what I end up reading! There will never be enough time to read all that I want to read. I am over halfway finished with The Tenderness of Wolves. I am betting that it makes the Top list next year. More to come on that! 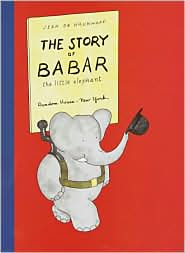 About 55 years ago, my Uncle Bill noticed a little 4, almost 5 year old, girl who knew how to read and loved books. He had a friend who owned a bookstore and so for each birthday of the little girl’s childhood, Uncle Bill had his friend send a book to the little girl. One of the early books sent was The Story of Babar by Jean de Brunhoff.

Jump ahead 25 years and the little girl now has 3 children. When the youngest was born, he was given an elephant that became his best friend for many years (yes, even at age 28, the elephant is part of his family).

Now, go about 30 more years. That once little girl now has 4 grandchildren (yes, I am the little girl, now age 59). The youngest of the grandchildren is Lucy, who at age 4 ½, discovered The Story of Babar in Grandma’s bookshelf about a month ago. The book is inscribed “To Alex, our favorite little boy. Merry Christmas 1985.” Lucy has had Grandma read and reread the book to her. I now have it wrapped up under the tree to give to Alex this year again, so he will have it for his own children when they begin to arrive!

Here’s a sad thing, well, actually a couple of sad things. A few weeks ago I was shopping with my 2 daughters and my daughter-in-law and I mentioned that I wanted to get a copy of The Story of Babar for Lucy for Christmas. My daughter-in-law (who I might as well call my daughter she is such a wonderful addition to our family) had never heard of Babar until Alex had told her about him! I couldn’t even imagine that! Then when I went to Barnes and Noble to choose a Babar book, the only one that they had was The Story of Babar. They don’t carry any of the other books, because there is no interest in them. I was so sad! No interest in them??? Ask Lucy about that!

Last night, Lucy was at Grandma’s house, which is all decorated for Christmas now, and she discovered Babar and Father Christmas laying under the tree with the other children Christmas books. You cannot hardly imagine the feeling of that little girl calling Grandma in to read it to her in bed before going to sleep. She laid her head on my shoulder and knew all the names of the characters. It was heaven! A third, generation of Babar lovers!

By the way, if there happen to be any of you out there who don’t know about Babar, or would like to read about the history of Babar, check this out:

Sarah’s Key by Tantiama De Rosnay. I found this to be an amazing story. It was very easy to read, with short chapters that alternated between the present and some true events that occurred in 1942.

The story begins with Sarah, who was an 10 year old French Jewess girl, living in in July of 1942 when the French police gathered up the Jews (men, women and children) and sent them to the Velodrome d’Hiver stadium. As the police came to their apartment to get them, Sarah locked her 4 year old brother in a secret cabinet in their apartment, telling him that she would be back soon to get him. In the past, when people had been taken away, they returned either that day or the next day, so Sarah thought she would be returning, and took the key to the cabinet with her. However, this time was different.

The families were not provided any food or water or facilities in the stadium, and people began dying. The only positive thing was that the families remained together there. Sadly, after a couple of days, the people were loaded on cattle cars and sent to , then to .

Meanwhile, the book jumps forward to in 2002. Julia Jarmond, an American journalist, is married to Bertram Tezac, a Frenchman, and they have an 11 year old daughter, Zoe. Julia has lived in for the last 25 years. She is assigned to do an article on the 60th anniversary of the round-up. As she begins researching the time, she learns of a family connection and of a little girl, Sarah. Julia becomes consumed with the story and seeks out any information that she can gather.

I don’t want to tell too much more about the story. I found myself picking up this book any spare moment that I had…it was that intriguing to me. However, I have to admit, also, that it had many interesting connections for me…I have always read a great deal about the Holocaust in general, with a special fascination with the French part of it. Julia’s research entailed a great deal of genealogy type work, which I am obsessed with. And the different family dynamics and connections, played right into my psychotherapist role! Another attraction to the book for me was the instant recognition and comfort level that Julia had with one of the characters. I am fascinated with reincarnation, and that fit well with my beliefs of people that we have known before we were born.

I also became so interested in the story that I had to do a little research of the time for myself. Here is an excerpt from one of the articles that I found:

In the 15th arrondissement, not far from the , between Quai Branly and Quai de Grenelle is a memorial to a shameful chapter in French history – the Place des Martyrs Juifs du Vélodrome d’Hiver, dedicated in 1994. It was nearby, on the rue Nélaton, that the huge Vél d’Hiv was located. An indoor stadium used for six-day bicycle races, concerts, boxing matches and other events, it was from 1942 until its demolition in 1958, one of the most infamous places in all Paris. Early in the morning of July 16, 1942, the French police, acting under orders from the German Gestapo (headquartered at the Hotel Lutetia on the Blvd Raspail), wrenched over 13,000 Jewish men, women, and children from their beds and brought them here. Kept under horrendous conditions for days, they were shipped to the transit camp at (outside the city) and then to .

I have to admit that I was so moved by this story that I cried at the end of it. I haven’t been so touched by a story for a long time. This book will stay with me for a long time. It very accurately portrays the sadness and pain that keeping family secrets can cause. It also proves my oft-said point-that nothing is ever a secret.

For anyone interested here is the link to Tatiana de Rosnay’s blog: http://www.sarahskey.com/

Do you want to hear about...

Do you want to hear about books that I have read that I didn't really care about?

I just finished the Secret Life of CeeCee Wilkes by Diane Chamberlain and I feel like it wasn't even good enough to bother writing about. I did finish it, but don't know why. I kept complaining about it and my husband ekpt suggesting that I quit reading it, but I did read it all anyway. It never got better.

Anyway, I would appreciate feedback from readers if they want to hear about the books that I felt were a waste of my time.
Posted by Sue F. at 7:00 AM 1 comment:

The Outlander by Gil Adamson. How I wish I could write like this! Another first novel by a very gifted author. I will definitely keep my eye out for more books from her.

The Outlander is the story of a 19 year old married woman (Mary Boulton), who in 1903, had enough of her abusive husband, and shot and killed him. She knew that her two brother-in-laws would not allow the death (ok, murder) go unpunished, so she began a life of running. She heads toward the mountains to avoid capture by the brothers, who want to avenge their youngest brother’s death. Mary suffers from auditory and visual delusions, which add to her despair. She flees both from her delusions and her would-be captors.

Mary came from a fairly well off family, but married into poverty. After her baby died, her depression escalated and she retreated further into her mad mind. In the snowy mountains of and she nearly dies several times. She is found by William Moreland, who is referred to as “the Ridgerunner” and they begin a tenuous relationship. He is a long-time frontiersman who lives in the mountains and exists in the wild. He left civilization long ago. As he and Mary become closer, he leaves.

She then begins her wandering again and comes to a town where she has been told to find “the Reverend”. He takes her in and is much of a father figure for her. Meanwhile, Mary’s brothers-in-law are still on her trail.

I really am not giving the story justice with this synopsis…it is an excellent story, and so well-written that I never wanted to put the book down. It is along the lines of , which I loved!

I guess the highest praise that I can give it is to say that I will definitely read this book again. It was that good!