Interesting that the first book I read in 2012 was Jack Kennedy (by Chris Matthews) and the last book that I read in 2012 was Lincoln (by David Herbert Donald).  I find it even more interesting because I am not a big fan of nonfiction.  However, the lives of both of these past presidents fascinate me.  One of my goals upon retirement was to become a Lincoln scholar.  Unfortunately, that has not happened, but after seeing the movie Lincoln, my interest was renewed.  (BTW-the movie is incredible). 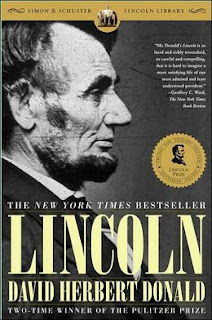 Lincoln by David Herbert Donald is an amazing book.  It is extraordinarily researched, and is based on Lincoln's personal papers and records.  It is a long book; however, it is a great read. I do have to confess that I found some of the book difficult to focus on, as I am not a person terribly interested in politics.  My interests always lie with who the person actually was/is.  And I thoroughly enjoyed those parts of the book that discussed Lincoln's personal life.  I have much more reading to do on Mr. Abraham Lincoln.

Anyone who is interested in Abraham Lincoln and his politics would find this to be a fascinating book.

[Just an interesting aside: I first learned of and bought this book several months ago after hearing Bill Clinton discuss it on the Today show.  He highly recommended it, and knowing what a well-read person he is, I trusted his word.  I was right to do so.]
Posted by Sue F. at 1:07 PM No comments:

End of the Year Reading

It looks as if I read a great deal over the past month, but actually I finished three books that I had started earlier this year (in the fall), and read two complete books this month.  So this is a rather abbreviated review of all the books, since there are five of them!

The Power of Habit by Charles Duhigg has been a top seller this year.  I enjoyed it very much.  It is not really a self-help book as one might think from the title, although one could use the information for themselves to work on either breaking or developing specific habits.  What I found most fascinating was how companies are able to focus on consumers patterns/habits and shape new habits so that consumers want their products.  Examples that come to mind from the book are Proctor and Gamble, Starbucks and Target.  I also was very interested in the study of AA and how it has worked over the years to help people achieve sobriety.  The book also shared examples of how individuals have been able to identify and change behaviors for themselves. Very interesting reading.  The book is very readable and fun to read.

Dying To Be Me by Anita Moorjani has been a much talked about book this year. It is the story of the author and how when she was close to death, experienced a near-death-experience and  was healed of her cancer.  The author's point is that she had the power to heal herself.  I wasn't very taken with the whole thing, although certainly some of what she wrote is helpful in that it is important to love yourself, find your Higher Power, etc.

Reinventing the Body, Resurrecting the Soul by Deepak Chopra was written in 2009.  I was just recently (in the past two months) introduced to meditations on Abundance by Deepak Chopra and want to learn and read more of his work.  This is the first book by him that I have read.  I found it quite thought-provoking.  I underlined much in this book.  What I especially found interesting were the parts where he highlighted the similarities between Buddha and Jesus.  Very interesting.  I will be reading more of his works.  I love the awareness and thinking that his words inspire in me.

Breakfast with Buddha by Roland Meruullo was one of my book group picks.  It was odd to be reading this right after I had just begun meditating...This is a novel about a successful, happy family man, whose parents died and he and his sister needed to go to across the country to South Dakota to take care of their parent's estate.  However, when Otto goes to pick up his sister, she said she was not going, but would like for Otto to take her friend out there with him.  The friend turned out to be a rather well-known guru, who had speaking engagements along the way on their journey.  It turned out that the experience allowed Otto to view his life through someone else's eyes and it was mind-opening.  This is a fun book to read.  Parts of it were laugh-out-loud funny.

The Lost Wife by Alyson Richman was recommended by my daughter-in-law and I loved. it.  The story was good, and the writing was even better.  Many things about this writing struck me.  The story is a story from the Holocaust-of a couple who had married and were separated during the war.  Josef and his family were able to leave Prague before the Nazi invasion, but his brand-new wife, Lenka, remained with her family to await Josef's arrival in the United States, when he would send for them.  Lenka ended up in a concentration camp, believing that Josef had died.  Almost sixty years later, they meet accidentally.

"Every person has an image or a memory that they hold secret.  One that they unwrap. like a piece of hidden candy, at night.  Pass through there and you will fall into the valley of dreams."


Just a great story of love never forgotten.
Posted by Sue F. at 2:57 PM No comments: 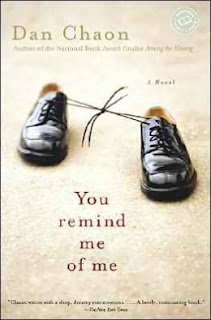 After reading Await Your Reply by Dan Choan earlier in the fall, I was wondering around the used book store and came across You Remind Me of Me, also by Dan Choan.  It turned out that You Remind Me of Me is his debut novel, published in 2004.  I liked it.  It is also a novel about brothers and identity, as was Await Your Reply. Knowing that Choan is an adopted child,  I find it very interesting that he continues to explore the concept of identity.

You Remind Me of Me is the story of three lives all connected in ways they are not aware of.  It all begins with a young unmarried woman in 1966 who gives up a child for adoption.  The book is about Troy Timmens, who struggles with finding his place in the world.  However, his son, Loomis, is Troy's one stronghold...the one thing that does make sense and meaning of Troy's life.  Jonah Doyle is younger than Troy.  He was raised by his mother who always seemed bitter and lacking in love.  Jonah carries horrible scars on his face from a dog attack...but those aren't as bad as the scars he carries inside his heart.  After his mother commits suicide, Jonah sets out to try to make sense of both her life and his life, trying to understand how they became who they were.

I liked the way Choan wrote the story.  It goes back and forth between years and stories, but it never seemed too confusing to me.  Each chapter is titled by a date...I think that helped.   Good book! 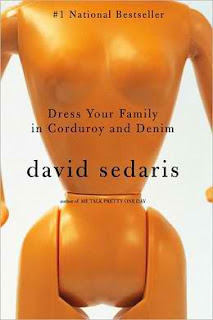 On a lighter note, one of my book groups had chosen Dress Me in Corduroy and Denim by David Sedaris.  It was also published in 2004.  I guess that I am catching up on books written that year!  The book is a collection of essays...some of which are laugh out loud funny.  A good example of his writing (about his sister):

"Growing up, she had a reputation for dishonesty, and her relentless, often inappropriate truth telling is, to her, a way of turning that around. 'I'm not going to lie to you.' she'll say, forgetting that another option is to simply say nothing."


Doesn't that sound like families?  It was great fun to read.  It is also light, quick reading, which is sometimes a perfect break between heavier books.  If you haven't read it, I recommend it! 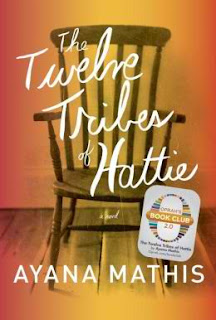 I just finished reading The Twelve Tribes of Hattie by Ayana Mathis, Oprah's latest Book Club pick.  It is quite good.  This is also a debut novel, and I look forward to seeing more of her writing.  It is a bit reminiscent of Toni Morrison's writing.

Fifteen year old Hattie left Georgia to find a better life in 1924.  The story begins with Hattie meeting (and marrying) August and giving birth to twins.  She named them Philadelphia and Jubilee.  August thought the names were "crazy".

"Hattie's mother, if she were still alive, would have agreed with August.  She would have said Hattie had chosen vulgar names: 'low and showy' she would have called them.  But she was gone, and Hattie wanted to give her babies names that weren't already chiseled on a head stone in the family plots in Georgia, so she gave them names of promise and of hop, reaching forward names, not looking back ones."

The twins were the joy of Hattie's young life.  But after their birth, life began to get harder and Hattie lost her joy.

Each chapter is about one (sometimes two) of Hattie's children, but all intertwine as they tell the story of Hattie's life.  Hattie ended up having eleven children.  And at the end of the story, Hattie is left with a granddaughter, who completes the "twelve tribes".  And joy begins to return to Hattie's life.

And now I am off, to continue my reading...I have lots of books to finish and begin!

Today my sister and I went to my Dad's to go through my Mom's Christmas stuff.  Mom died earlier this year and Dad only wanted to keep a few things.  As we went through some things, Dad came across a small, old notebook that Mom had written in.  Inside were lists of books that she wanted to read.

I just read The End of Your Life Book Club a few weeks ago and was envious of the author that he got to share reading books with his mother over the last two years of her life.  When Dad gave me this notebook, I felt like maybe this is my Mom's way of sharing, even though she is now gone.  I typed up the list and here it is:

Aunt Julia and The Scriptwriter by Mario Vargas Llosa

A Thief of Time by Tony Hillerman

The Journals of John Cheever

Shadows on the Grass by Isak Dinesen

A Man’s Search for Meaning by Victor Frankel

The Locusts Have No King by Dawn Powell

Tilting at Windmills by Charles Peters

The Fountainhead by Aryn Rand

By Robertson Davies:  Fifth Business
The Manticore
World of Wonders

By Jane Smiley: Barn Blind
At Paradise Gate
Duplicate Key
The Age of Grief
The Greenlanders
Catskill Crafts
Ordinary Love and Good Will

Landscape Without Gravity by Barbara Ascher

Bastard Out of Carolina by Dorothy Allison

How amazing is this?  I have read a few of these books, but not most of them.  This is going to be one of my 2013 reading goals for the year!