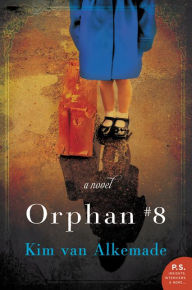 wanted to read it or not, but when I saw it on sale I finally picked it up.  In it, the author tells the story of how she came to write the book, which is historical fiction based on records that the author found while doing family history research. Ms. Alkemade was at the Hebrew Orphan Asylum in Manhattan going through records and found a record of a motion being made in 1920 to "purchase wigs for eight of the children who had developed alopecia as a result of X-ray treatments given to them at the Home...".  The book that the author ended up writing is based on her personal family history, which did not include any of her family receiving the X-ray treatments, but her grandfather had been placed there after his father abandoned the family and his mother could not care for him and his brothers.  And that is why the author was researching the records at the Home.

The story in the book is about a four year old girl named Rachel, whose father left and her mother had to place her and her older brother, Sam, in the Home because she couldn't care for them.  Since Rachel was still so young she was placed in the Infant area and separated from Sam.  Rachel was one of the eight children chosen for medical research that the ambitious Dr. Mildred Solomon was conducting.  The X-ray treatments left Rachel bald for life, which lead to teasing and harassment through-out her growing up years.  Her brother Sam had run away from the Home and when Rachel turned fifteen she left also, headed to Colorado where she hoped that she would find Sam and perhaps her father who had left over ten years before.

As Rachel got older, she became a nurse and eventually ended up working at the Old Hebrews Home in Manhattan.  And there she found a patient-Dr. Mildred Solomon, who was elderly and dying of cancer.

Thus, the dilemma of Rachel's life: does she care for the patient in a compassionate manner, or let her suffer (ie. withholding meds, etc.) to pay her back for all the suffering she caused in Rachel's life?  Rachel desperately wanted to hear that the doctor remembered her and would apologize for all that she had done.  Rachel now had all the power in her hands.

This was a good book, made more interesting after reading the notes at the end where the author explained her connections with it.