A Far Cry From Kensington 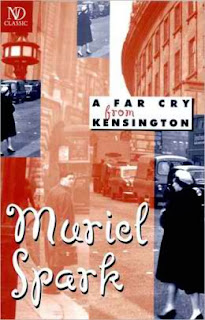 This novel is a story narrated by Mrs. Agnes "Nancy" Hawkins, who is looking back in time and telling the story of her years in postwar London.  Mrs. Hawkins was a 28 year old war-widow, who lived in a small rooming house in the Kensington area.

"It was 1954.  I was living in furnished rooms in a tall house in South Kensington.  I was startled, some years ago, by a friend's referring to 'that rooming-house near South Kensington Underground you used to stay in'.  Milly, the owner, would have denied indignantly that it was a rooming-house, but I suppose that is what it was."


Mrs. Hawkins described herself as:

"I was massive in size, strong-muscled, huge-bosomed, with wide hips, hefty long legs, a bulging belly and fat backside; I carried ample weight with my five-foot-six of height, and was healthy with it. "


As you might surmise, this book has many amusing, sometimes laugh-out-loud moments. The characters that Mrs. Hawkins interacts with both in her residence and her work are all eccentric in some ways.  And Mrs. Hawkins felt that people felt safe with her because of her appearance and the people would then confide and trust her, so she tended to know more about her acquaintances than others would.

She became aware of things not being right at work and discovered some shady dealings going on.  She also found that things were not right at her rooming-house with one of the tenants who was receiving anonymous, threatening letters.  Of course, it was in her nature to try to resolve all of these issues.

One of my favorite parts of the book?

"It's easy to get thin. You eat and drink the same as always, only half....I offer this advice without fee; it is included in the price of this book."


And that is how Mrs. Hawkins became Nancy to others.  She became thin and people viewed her in a different way.

The book is amusing, but not especially intriguing.  I found reading about Ms. Sparks' life much more interesting!  Ms. Sparks was born in 1918 in Edinburgh.  Although her parents were Jewish and Presbyterian, she later converted to Catholicism.  In 1937 she married Sidney Oswald Spark and had a son. They lived in Rhodesia at the time, but by 1940 she left her husband and son and returned to the UK.  Her husband was manic depressive and abusive.  They divorced.  A Far Cry From Kensington is Ms. Sparks' most autobiographical novel.
Ms. Sparks worked in Intelligence during World War II, then began writing.  She died in 2006.  I read that

Another Challenge to Myself

"Book award season is upon us! Last week, under a new set of rules, the National Book Awards released four nominee longlists for the first time ever. This is fantastic news for book-lovers, as it gives us a chance to sample the work of double the authors. Without further ado, the talented authors who were recognized by the association:

The Enchanted Life of Adam Hope

The Enchanted Life of Adam Hope by Rhonda Riley was the August choice of one of my book groups.  It is rampant with symbolism, of which I am sure I missed a great deal of.  It may be a book that I will have to re-read at some point to discover all that I missed! 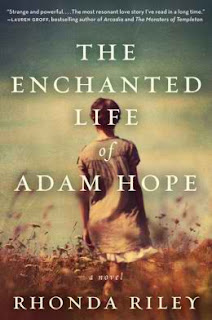 Evelyn Roe lived on her family's farm in North Carolina, where near the end of World War II, she came across what appeared to be a severely burned soldier buried in the mud.  She, of course, rescued him  and very soon realized that he was not an ordinary man.  First of all, his burns healed almost immediately, and then he became the image of Evelyn...a woman who looked just like her.  Evelyn called her "Addie".  As time went on, Addie realized that Evelyn wanted to marry and have a family, so she went off for awhile, then returned as a man...Adam.  They fell in love, married, and over the years had five daughters and built a horse-training business.

It was, at times, perhaps often, difficult for Evelyn to cover for their unusual secret, and eventually, following a terrible loss, they moved from the community to start over.  Over the years, it became evident that Evelyn was moving into middle age, but Adam was not, and Evelyn began to struggle with how this could be explained to others as she and Adam got older, with his appearance never changing, but hers getting aged.  Then one day, Adam disappeared.

This is, of course, a very brief summary of the book.  I initially had a hard time getting into the book, but there is something mysterious enough going on, that it kept my interest and I did become involved in it.  By the end of the book, I really liked it.  However, it is not a book that I would easily recommend to anyone.  There is much that is not explained in the story, and you just have to go with it.  That can sometimes be hard for one (me included), but if one can get past that, it's a good story!