These are three books that I read over the month of August.  They weren't among my favorite reads, but the fact that I completed them, unlike a couple of other books that I attempted, says something.

Harry Potter and the Cursed Child by J.K. Rowling was written as a play, which immediately put it 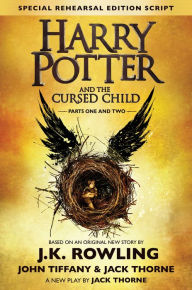 in the 'I don't especially want to read it' category, but when it was offered to me to read, I said yes and went ahead and read it.  And I am glad that I did.  I enjoyed the story.  And it is a very quick read. It was good to read about Harry as an adult.  The book is about Harry and his youngest son, Albus.  Albus has adventures at Hogwarts and many of the old characters are brought into play. It's a fun read.

Perfect by Rachel Joyce was a book I read about on my daily calendar!  Since I loved her other two books (The Unlikely Pilgrimage of Harold Fry and The Love Story of Miss QueenieHennessey), I was quick to read it.  I think that this book was written (or at least published) in-between the other two books. I didn't like it nearly as well as the other books, yet the story has stayed with me, so I always consider that a sign of a good book. This story is about an eleven year old boy, Byron, whose best friend, James, told him that he read that an extra two seconds was going to be added to the world. Byron became rather upset/confused over time as he tried to figure out how and when this might happen.  Meanwhile, Byron was in the car with his mother when she accidentally and unknowingly hit a young girl. After a few days, Byron confronted her about it and figured out that she did not know that she had done it.  They went to the home where the girl lived and his mother, out of guilt, befriended the girl's mother, who then took advantage of the guilt. Meanwhile, Byron and James were working on a plan called "Operation Perfect" trying to figure out what was really going on. In alternate chapters of the book, the story of Jim was told.  Jim was in his 50's and had been released from the local mental institution and was trying to survive.

I was glad that I finished the book, because there was quite a twist at the end.  And as I said, the book ended up being quite thought-provoking.

what we keep by Elizabeth Berg was an old book that I found on my shelves and decided to re-read.  Well, I'm sorry that I did and I'm glad that I did. It is a book about mothers and daughters. The book began with Ginny Young, traveling on a plane to see her mother whom she hadn't seen or spoken to for thirty-five years.  Ginny's sister, Sharla, had asked her to come with her to visit their mother.  Sharla told Ginny that she was sick, possibly dying and that she wanted to see their mother, so Ginny reluctantly agreed to come with her. As she was flying across the country, Ginny told 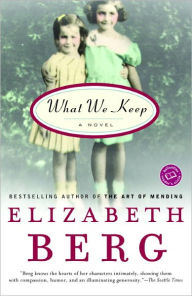 the story of her family and what had happened in the summer of 1958.  A new neighbor, Jasmine, moved in next door, and her mother ended up one day leaving the family behind and going off with Jasmine.  The girl's mother made numerous attempts to visit and/or talk to the girls, even moving back to town after a month of being gone, but the girls would not have anything to do with her, so within a year, she moved away and completely left their lives.  Only the last few pages are about actually seeing her mother.

I found the book trying too hard to pass on "wisdom" about mothers and daughters.  Some relevant, but some just too mushy and trite. And the book left me with many questions about the story that either weren't answered or I missed it.

Glad I read it? Because I feel fine about moving the book on out of my house! Sorry I read it? It was a waste of good reading time!
Posted by Sue F. at 9:39 AM No comments:

Recent Nonfiction that I have read

Here are three nonfiction books that I have read recently. Two I highly recommend, the other not so much!


First is Triggers by Marshall Goldsmith and Mark Reiter. I really liked this book and took a lot away from it. 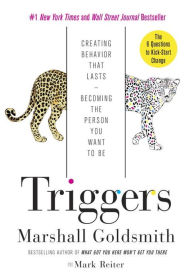 This book is basically about learning how to identify and overcome trigger points in our lives.  I wish that I had read it thirty years ago when I was beginning my career.  It would have been very helpful in dealing with co-workers and staff. What I especially took away from the book was in Part Two. In this part of the book, the author talks about altering our own behavior, not the behavior of others.  And how that can change everything! The first chapter was 'The Power of Active Questions'.  The next chapter was 'The Engaging Questions'.  This chapter settled on six questions that one was to answer for themselves at the end of each day.  I incorporated some of these questions, along with other questions more pertinent to me, into my daily journal, where I track them each day (with just a check mark).  I have found this to be quite powerful for me, and very helpful to encourage changes for me. I've recommended this book to several people and I recommend it to those reading this!

In my spiritual reading, I have completed two books, both by Parker J. Palmer.  Mr. Palmer is a teacher and a Quaker. In Let Your Life Speak, subtitled Listening for the Voice of Vocation, Mr. Parker shared the story of how listening to his inner voice led him to his passion/vocation of teaching. He also shared his experience of dealing with depression. As he explained vocation:

"Today I understand vocation quite differently-not as a goal to be achieved but as a gift to be received."


"It comes from a voice 'in there' calling me to be the person I was born to be, to fulfill the original selfhood given me at birth by God."

The last chapter of the book is "There is a season", which probably spoke to me the most.  He used the metaphor of the seasons as we take the journey from dark to light in our lives. I struggle with experiencing the seasons of fall and winter, and his words helped explain much to me:

"Autumn is a season of great beauty, but it is also a season of decline: the days grow shorter, the light is suffused, and summer's abundance decays toward winter's death. Faced with this inevitable inter, what does nature do in autumn? It scatters the seeds that will bring new growth in the spring-and scatters them with amazing abandon."

I don't know why, after almost 67 years on this earth, that this spoke to me and helped me appreciate fall, but it speaks of hope instead of death and that changes everything!

I really enjoyed studying this book and it had a very strong and positive impact on me.

So then I decided to read Mr. Palmer's book A Hidden Wholeness. I struggled greatly with this book, mostly because I was not interested in the 'circle of trust', which the book seemed to be training one for experiencing.  I just wasn't into it.