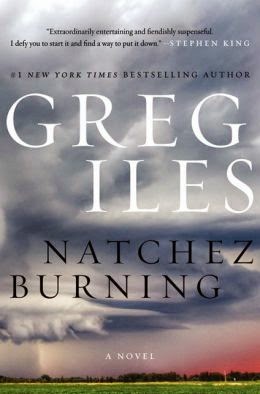 Oh my goodness.  I have been waiting forever for the next book by Greg Iles to come out and finally last week it arrived.  Greg Iles was in a horrific car accident in 2011, and had a long recovery, thus the long wait for his next book.  I have read in reviews that the book was originally going to be called The Bone Tree, but as the story evolved it became so long that the original book planned has now become a trilogy and Natchez Burning is the first book of the trilogy.  It is a tome of a book at 788 pages.  Don't let the size keep you from reading it.  It is an absolute can't-put-it-down read.

Natchez Burning is the fourth book of Iles' that features Penn Cage as the main character.  The story, of course, takes place in Natchez, Mississippi.  Penn was a former prosecutor, and author who has become mayor of Natchez.  His father, Dr. Tom Cage, was a highly respected physician in town who was charged with the murder of his former African-American nurse, Viola Turner, who had worked for him in the 1960's.  During that time, Viola's younger brother had been stabbed by the KKK and then disappeared. Shortly after his disappearance, Viola moved to Chicago.  She had recently returned to Natchez and was dying of cancer.  After she died, her son accused Dr. Cage of giving her a lethal injection.  When Penn learned of the charges, he went to his father, and his father refused to discuss it or Viola with him.

Penn began working to learn more about Viola and his father's relationship with her.  Meanwhile, Penn was also finding out more information from Henry, a reporter of a small town newspaper who had been working for years trying to gather information on the 1960's cases.   Penn's fiance ran the local newspaper in Natchez and began working with Henry to help with finding information that would clear Dr. Tom Cage.

As Penn worked to find the truth, the dark past of Natchez came to light, with murders, violence and disappearances from the 1960's Civil Rights movement, the Ku Klux Klan and a group more elite than the Klan, the Double Eagles, a group that was formed by the most powerful men in Natchez in the 1960's.  Even more interesting, as Penn dug deeper, he learned of possible connections to political assassinations of those times.

As I said, I could not put this book down.  It is riveting!  I have always been a huge fan of Greg Iles' works and this is the best so far!  I cannot wait for the next one in the trilogy, set (hopefully) to come out next year.  There was one sentence near the end of the book that gave me a clue of what is to come and it is fascinating!


Greg Iles was raised in Natchez and lives there now, which I think adds to the flavor of the book.  For anyone interested, here is a list from Wikipedia of his novels:

The Fault in Our Stars

This is crazy.  I usually avoid Young Adult books altogether, and now The Fault in Our Stars by John 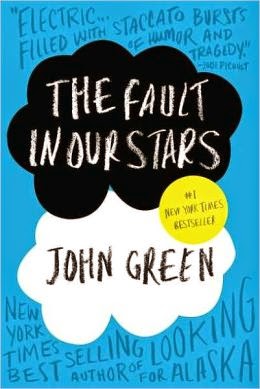 Green is the second one I have read in two months.  And the second one that I have really liked! My granddaughter had recommended this one to me months ago, and while visiting at her house a few weeks ago I borrowed it from her and read it (in one day...a quick read).

It is, at appearances, a rather simple book, but I found great wisdom and compassion in the story.  The book is narrated by Hazel Grace, who at age sixteen, had thyroid cancer and was being kept alive by an experimental drug.  Hazel Grace had withdrawn from school a couple of years earlier to deal with her illness and, at her parents urging, began to attend a support group for young cancer patients.  Of course, the hard part of that was that the group members would always be in various stages of life/death.  The good part was that Hazel Grace met other kids her age who good be good support.  It was there that she met Augustus who had lost a leg to cancer.  The connection/attraction was immediate between them.

At the essence of the story is Augustus' concern about how he will be remembered...he wanted his life to have meaning.  Hazel Grace's concern was how her death would hurt her parents.

Without giving away the rest of the story, be assured that it is a beautiful one. 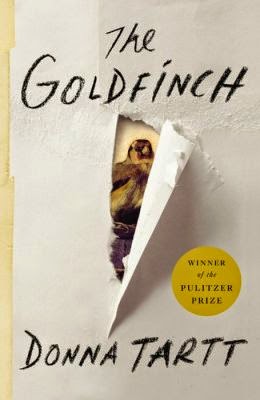 I waited awhile to read The Goldfinch, although I had it on my TBR list since it came out.  I usually prefer to read softcover books, thus I wait until they come out in soft cover.  But when I saw The Goldfinch sitting on a bookshelf at my daughter's house, I jumped on the opportunity to borrow it!  The Goldfinch, written by Donna Tartt, is a huge book...784 pages.  I will admit that I felt a little bogged down during the middle part of the book, but in hindsight, I felt like most of that part of the book was essential to the entire story, so I don't think that it could have been shortened much.

The story is narrated by 13 year old Theo Decker who lived in New York City with his mother.  His father had left the family, so it was just the two of them struggling to get by.  One morning, Theo's mother had an appointment at Theo's school to discuss Theo, so she kept him out of school and they went to the Metropolitan Museum while waiting to attend the appointment.  While visiting the museum, Theo caught the eye of a young girl who was also there with an older gentleman.  Theo told his mother he wanted to go to the gift shop for a bit (hoping to meet the girl), so his mother went off to see more paintings.  A few minutes later a horrific explosion occurred in the Museum.  Theo was knocked unconscious and went he woke, he began to find his bearings.  He came across the older gentleman who had been with the young girl.  The man was gravely injured, but was able to talk to Theo a bit.  He gave Theo an old ring to keep safe.  Theo eventually made his way out of the Museum never having been discovered by the rescue workers.  However, before he left the Museum, without consciously thinking about it, he took an old Dutch masterpiece called The Goldfinch that had survived the explosion.

The rest of Theo's life centers around The Goldfinch painting and his attempts to keep it safe and to ultimately find a way to return it.  With his father gone, he went to live with a friend's family, until some time later when his father, wiht ulterior motives, came to take him to Las Vegas to live with him.  There Theo meet Boris, who Theo follows into much trouble.

After living in Las Vegas for some time, circumstances arrived that made it necessary for Theo to leave there, and so he made his way back to New York, and let the ring he had been given lead him to his new life.

Keeping The Goldfinch painting safe was the purpose of Theo's life, from age 13 through adulthood. It seemed to become what he had left of his mother to him.

I found the very end of the book to be the most well-written.  There was a lot of philosophical thinking at the end.

"What if our badness and mistakes are the very thing that set our fate and bring us round to good? What if, for some of us, we can't get there any other way?"

It's a good book.  I have to agree with a friend of mine who said that she couldn't stop reading it, yet couldn't really tell you what was so good about it! Another sign of a good book...I thought about it a lot after I had finished it.

The Goldfinch won the 2014 Pulitzer Prize for Fiction and was also one of the New York Times Book Review's 10 Best Books of 2013.