A few weeks ago I posted on the book Wintering by Peter Geye.  I loved his writing enough to seek out his two earlier books.  They did not disappoint.  Geye is from Minnesota and all three of his books are placed there.

Peter Geye's first book was Safe From the Sea.  It took place in the wilds of Minnesota 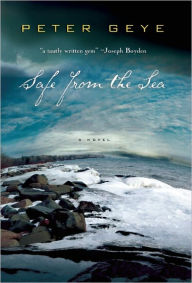 and was the story of a son and his dying estranged father.  Noah lived in Boston with his wife when he received a phone call from Olaf (his father) saying he was ill.  Noah hadn't seen his father in five or six years, but felt that he needed to go see him, fearing that his father's illness was serious. When he arrived at his father's place, Noah realized how bad things were for his father. As he stayed with his father,Olaf began sharing stories from long ago, specifically about the shipwreck of the Ragnarar.  Olaf had been one of only a few survivors of that wreck thirty-five years earlier. And he had never told anyone the true story of the survival until this visit.  As he told Noah:

"Everything I just told you, it's been rotting in me all this time."

And so began some healing for both Noah and Olaf.  Understanding of that fateful night that forever changed everyone's lives settled into both of them.

This book won the Indie Lit Award Winner for Best Literary Fiction. I found it to be a great first novel!

Peter Geye's second novel, The Lighthouse Road, was the prequel to Wintering and I was so sorry that I hadn't read it first, because it would have helped tremendously in sorting out who everyone was and their relationships to each other. 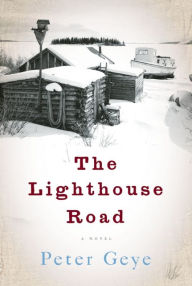 The Lighthouse Road began in 1896 with the story of a pregnant young girl,Thea Eide, who had recently arrived from Norway,.  Thea had come to Northern Minnesota to live with her aunt and uncle.  When she arrived, she learned that they had both died.  She was taken in by Hosea Grimm, a prominent townsperson, who lived there with his "adopted" daughter Rebekah. Soon Thea was sent to work as a cook in the logging camp and there she became pregnant. When winter came, the camp shut down and Thea returned to town to Hosea's home.  It was there that her son Odd was born.

The book's chapters shift back and forth from 1896 to 1920-1921.  Jump to 1920 and Odd was a young man in love with an older forbidden woman. He built an "ark" and they traveled to Duluth for a new life away from all they had known.  But history replays itself and both returned to the place they were from and there the story Wintering begins.

I found this to be a very powerful story of resilience and love.  I would strongly recommend that this be read before reading the Wintering.  Together they make a wonderful story of generations in the cold Minnesota woods.

**Note: I ordered The Lighthouse Road in paperback twice and both issues arrived beginning with page 23!  So I ended up ordering a hardcover copy of the book from the library and it was find.

Did You Ever Have A Family

Did You Ever Have A Family by Bill Clegg has had rave reviews and been on the New York Times Best Seller List and I just kind of missed what everyone was so enthralled with.

I finished the book, but it was a bit of a chore for me.  The book was, at first glance, a story 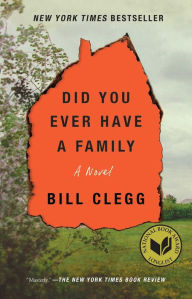 about a disaster that occurred on the eve of a wedding, killing the bride-to-be, her fiance, and the boyfriend of the mother of the bride.  The story tells of the grieving of the mother, June Reid.  And in the story of her grief and loss, are the stories of others who were affected by the horror.  Small town secrets are told.

Sounds like something I could get into, but I just never did.  That being said, the book has had much success, so don't go by me!
Posted by Sue F. at 11:21 AM No comments:

I just finished three books in rapid succession, each good in it's own right.

1) The Mothers by Brit Bennett.  This is the author's debut novel and I will look 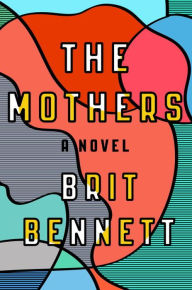 forward to seeing/reading what comes after this book.  The book has had wonderful reviews, and I wasn't as taken with it as some reviewers, but, having said that, it was a good book.  It centers around three teenagers, living in southern California who are each part of a black church community.  Seventeen year old Nadia's mother had recently committed suicide, leaving her alone with her father. Her best friend, Aubrey, had moved in with her sister to avoid living with an abusive step-father, and Luke, the son of the church's pastor, had suffered a bad football injury that took away his dream of playing college football. The story was sometimes narrated by Nadia, but, more interestingly, was often told by "the Mother's", who appeared to be the older women of the church.  It seems that through-out the following years, "the Mother's" suspected secrets about the three teenagers. Years later, after Nadia had completed college and law school, she returned to the town to care for her father, and "the Mother's" stirred up old unfinished business between the three main characters.

It was an interesting story about three teenagers who each suffered in their own way with their relationships with their mothers, and how the church's "mother's" continued to not mother these children.

2) The Two-Family House by Lynda Cohen Loigman.  Again, I had read great 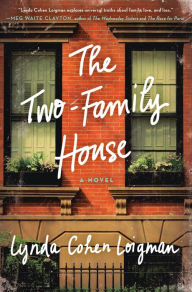 reviews about this debut book, and was rather let down.  I found the story terribly predictable, but yet, the author did a good job portraying the characters.  It is a story that takes place in post WWII and is about two brothers who worked in their own business, and lived in a two-family home with their wives and children.  The brothers were very different from each other, as were their wives. Abe and Helen had four boys, Mort and Rose had three girls.  Rose and Helen were best friends, raising their children together. When they both ended up pregnant at the same time, they each hoped for what they didn't have-a son for Rose and Mort and a daughter for Abe and Helen.  A blizzard came while Abe and Mort were out of town and both of the women went into labor.  You can guess the rest.  The women made and lived with an impossible secret for years. As you can imagine, there was a terrible impact that affected all, even as others did not know the secret.  The author did a good job with the story, other than it being so predictable.

3) Wintering by Peter Geye. I just happened to come across this book at the 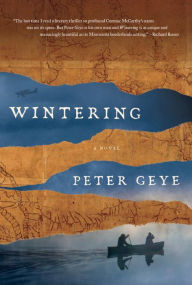 library and picked it up to take with me for the weekend.  I loved it.  I will say that I struggled mightily to figure out the relationships in the book while I was reading it, but as I got near the end, it all came together.  I think that the book was purposely written that way, but it was hard for me with my need for order.  However, as I searched online about other books by the author (he has written two other books), I learned that in his second book the Eide family was introduced.  So now I have to read that book to see what I may have missed!

Wintering is, at first read, the story of Harry Eide and his son Gus who went for a winter voyage in the border waters of Minnesota (where they were from) and Canada after Gus graduated from high school.  However, the book begins thirty years later, with Gus telling Harry's longtime love, Berit, that the now elderly and demented Harry has disappeared.  As Gus continued to seek out Berit the winter that Harry disappeared, he began telling her the story of that winter when he and his father had gone out to spend the winter in the wild, eventually telling her long-held secrets about that time.  The book is narrated by Berit, who had come to that wilderness, many many years before and knew many secrets that Gus did not know about his family and about the town.

Geye's writing is beautiful and grabbed me at the very first sentence:

"Our winters are faithful and unfailing and we take what they bring, but this season has tested even the most devout among us."

Later in the book, he wrote:

"Every person, I have come to believe, has a moment or a place in life when all four points of the compass converge, from when or where their life finally takes-for better or for worse-its fated course."

I found a definition of the word 'wintering':  "To lodge, keep, or care for during the winter: wintering the sheep in the stable".

To me, that is what the book was about: the wintering of keeping and caring for the history of Harry Eide and his family.  A beautiful book.