Once Upon A Secret 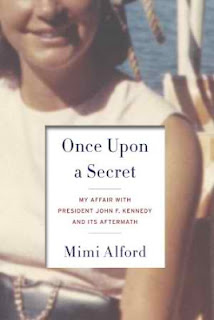 Once Upon A Secret-My Affair with President John F. Kennedy and its Aftermath by Mimi Alford is the story of a nineteen year old White House intern who had an eighteen month affair with President Kennedy.  It is a simple, easy read and was quite interesting, in that it gives a broader sense of the womanizing that must have gone on.  My guess is that there are/were hundreds of women who could have written the same My Affair with President John F. Kennedy type book.  I don't mean that all of his affairs were under the same circumstances, but that I think there were many, many stories that could be told.

Ms. Alford did a good job exploring and relating how her experiences affected her life.  The story made me sad for her, but I don't believe that she necessarily regrets the affair.  It appeared to me that she regrets how she handled the next forty years of her life with having to hold onto that secret.

While reading the book, it took me back to being a nineteen year old college girl and how easily girls of that age can readily be taken in by power, love, money, etc.  And how those experiences play out for the rest of a woman's life, which I dealt with daily in my work as a psychotherapist working with women.  The imbalance of power is a powerful thing that many use to their advantage.  Sadly, President Kennedy appeared to be one of those who did just that.
Posted by Sue F. at 10:03 AM No comments:

To Kill A Mockingbird

Ok, I know...I have probably run it into the ground that To Kill A Mockingbird by Harper Lee is my all-time absolute book.  In January my afternoon book group decided that we would read a classic book every other month and, of course, I piped in with To Kill A Mockingbird, which was then chosen as our March read.  After I began reading it, I realized  that it has been probably fifteen years since I last read it.  Oh My God...it is still the absolute best book I have ever read!  I so thoroughly enjoyed this last re-read!

I am going to go under the assumption that everyone reading this blog has read To Kill A Mockingbird.  (If you haven't, please do so!), so I won't go into the story.  Instead, I will share what some of my favorite lines from the book are.  I was surprised, at this my probably tenth time reading the book, that some of these lines still made me cry!

So, in order as they appear in the book, here are my favorite lines:

Dill was upset at how the prosecutor was treating the defendant and Scout was trying to explain that he was just doing his job.  Dill remarked that Atticus didn't do the same and Scout finally was able to explain about Atticus: "He's the same in the courtroom as he is on the public streets.".


Atticus talking to Jem: "As you grow older, you'll see white men cheat black men every day of your life, but let me tell you something and don't you forget it-whenever a white man does that to a black man, no matter who he is, how rich he is, or how fine a family he comes from, that white man is trash."

And as an aside: after I finished reading this last weekend, we watched the movie...just as powerful!

I also have to add that one of my most fervent wishes is that upon Ms. Harper Lee's death, a sequel is found.  But then, do I want that?  Could it possibly live up to her first? Hmmmm...
Posted by Sue F. at 9:27 AM No comments:

Snow Flower and the Secret Fan

Snow Flower and the Secret Fan by Lisa See came out in 2005, I believe.  Many of my friends had read it and loved it.  But with my usual reluctance to read stories from/about other countries, I just never got to reading it.  Well, I finally did read it and it was good.  It is the story of friendship taking place in nineteenth century China between two young girls, Lilly and Snow Flower.  The girls were matched as laotong, or "old same", a relationship that is expected to last their lifetime and, in many ways, be a stronger bond than marriage.

There is much sorrow and grief in the story as the girls develop into women and live their lives.  They have a grave misunderstanding that affects their lives to the end.  As others have talked about with the book, the foot binding ritual and how it affected the women's lives is striking.

The two things that stood out about the book for me were that I loved how the story was told from an eighty year old woman's perspective.  Very touching.  And the second thing that I found absolutely fascinating was the really found in the back of the book in the Author's Note and Acknowledgments.  In the book, the two girls use a secret language, called nu shu,  to write to each other on a fan that is passed back and forth between them.  In the Notes, the author writes about "a written language used solely by women and it had been kept a 'secret' from men for a thousand years."  Ms. See had come across a brief mention of nu shu while doing research for an article and began to search for more information.  It was so interesting to me to read her notes about nu shu.

Good story and I learned some interesting things!

The Sense of an Ending 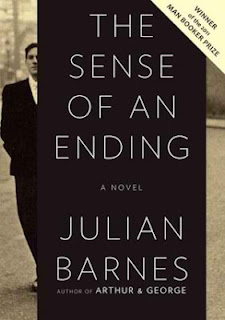 The Sense of an Ending by Julian Barnes was one of my book group's choices for February.  I had read about the book prior to it being chosen and it was on my to-be-read list, so I was happy when I learned that it was presented and chosen.  I wasn't present for that meeting, so I didn't get to vote on it, so I was even happier when I was told that it was the February choice.  And what a great book group pick it was! (note: this novel won the 2011 Man Booker Prize)


From the first page I was grabbed.  The author starts the story with the narrator listing six things that he remembers "...in no particular order". Of the list he says:

"This last isn't something I actually saw, but what you end up remembering isn't always the same as what you have witnessed."

And so begins the book.  It is a story of memories and how we shape those memories, sometimes to our advantage, or at least, to our actual emotional survival.

The story begins with the Tony, the narrator of the story, discussing his school days in England, when a new student, Adrian, joined Tony and his two friends in their small clique.  Adrian was a bit of a mystery, never talking about his family, and seemingly more serious about school than the other boys.  The four boys went off to college and slowly drifted apart. Tony got involved with Veronica and introduced her one weekend to his three friends from high school.  The following year, Tony and Veronica broke up, and shortly after, Tony received a note from Adrian asking permission to go out with Veronica.  Tony replied with a brief, terse postcard, stating "...everything is jolly fine by me, old bean.", but after a few weeks, sat down and wrote a letter to Adrian, warning him about Veronica.   Following graduation of college, Tony took off to the United States to travel for a bit.  Upon his return home, he learned that Adrian had committed suicide.

The book is written forty years later, as Tony relates all of this past history.  Tony retired and had an ex-wife he remained friends with and one daughter.  He had led a fairly uneventful life, until one day a letter arrived regarding the estate of Mrs. Sarah Ford, who was Veronica's mother.  Tony learned that she had left him five hundred pounds and two "documents".  He learned that one of the documents was Adrian's journal and that Veronica was in possession of it and was not ready or willing to let him have it.  Thus begins Tony's quest to search the past and try to figure out the truth versus his memory of the truths.

The story is about how we remember the past and what we have done with our life.

"What you fail to do is look ahead, and then imagine yourself looking back from that future point.  Learning the new emotions that time brings.  Discovering, for example, that as the witnesses to your life diminish, there is less corroboration, and therefore less certainty, as to what you are or have been."

My book group had a great discussion about this book!  It is a short, quick read, but one that will long stay with you.  I will reread this book in the future!