I read The Paying Guest by Sarah Waters for one of my book groups.  We met to discuss it yesterday 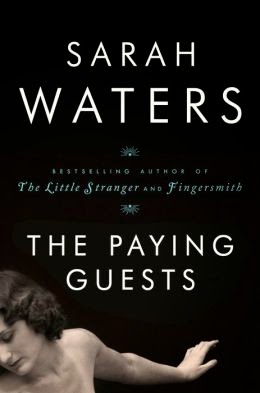 and agreed that perhaps the English just have different tastes in books, as it is a best seller over in England.  But then another member pointed out that it is also a best seller here, so that shot down that theory.  While we ended up having quite a good discussion about that book, it wasn’t wildly received by any of us.

The story takes place in 1922 outside of London.  Frances Wray lived in a big, old house with her mother.  Her father and two brothers had died, and they were left there alone to try to manage the home and the expenses.  After deliberation Frances and her mother decided to rent out some rooms to help with their debts, something they would never have dreamed of doing before.  Frances and her mother rented out part of their upstairs to Lenny and Lillie Barber, a working class couple, who came from a very different lifestyle than Frances and her mother.

The second half of the book became a mystery who-done-it.  But it lost my interest at that point.  I found it slow-going.  And I never cared about any of the characters.  I didn’t find any of them especially likable.  There were a few twists at the end that added a bit of interest but all-in-all, I just wouldn’t recommend this book to anyone.
Posted by Sue F. at 11:23 AM 1 comment:

What I Know For Sure


I received Oprah Winfrey’s new book, What I Know For Sure, for Christmas.  I had picked it up at 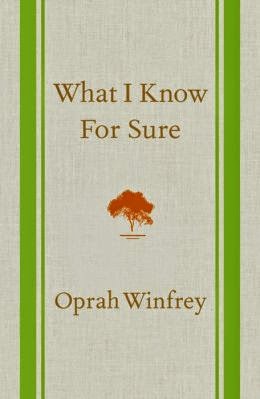 the library earlier, read a few pages, and took it back.  I didn’t want to keep reading it because I was taken with all of it immediately and wanted my own copy! As trite as it sounds, I found this book to be one of the most inspirational books I have ever read.  While I am not a huge Oprah fan, I do respect all that she has done, and find her spirituality to be quite on target with my own beliefs.  I found myself wanting to mark every page for something written on it, and finally realized that I just couldn’t do that.  I had to accept that I found the whole book inspirational.

The book is a compilation of her monthly columns in the Oprah magazine.  So each essay is quite short, but distinct.  It is divided into sections: Joy, Resilience, Connection, Gratitude, Possibility, Awe, Clarity and Power.

"You have the choice this very moment-the only moment you have for certain.  I hope you aren't so wrapped up in nonessential stuff that you forget to really enjoy yourself-because this moment is about to be over.  I hope you'll look back and remember today as the day you decided to make every one count, to relish each hour as if there would never be another."

The book also has a small bookmark ribbon attached!  Bonus.


I recently read The Homesman by Glendon Swarthout.  It was written in 1988.  I was not familiar with his works, but he was quite an accomplished author of Western fiction, with fourteen other books written about the Wild West!  The Homesman won two awards in that category.  It has been made into a movie starring Tommy Lee Jones as the homesman.  I am looking forward to seeing it.

The Homesman takes place in Nebraska in the 1850’s.  I found the story very interesting.  It is primarily about the women pioneers and how difficult life was.  For many women (and probably men) the hard life shattered both their mental and physical health.  The families were unable to care for the women, and so a homesman would be found to escort the women back East to their families there or to institutions where they would be cared for.

In the book, four of the wives living in the area had gone mad, and something needed to be done for them.  However, none of the men in the area would step up to take the women back East, so a spinster, Mary Bee Cuddy, volunteered to take them back to Iowa where there were people who would then take the women on to their final destination.  As Mary Bee was making preparations for the journey (which would take four or five weeks in a covered wagon), she came upon a man hanging from a tree, a noose around his neck, still sitting on his horse (the point being when the horse took off, the man would be killed).  It turned out that the man, George Briggs, had jumped claim to another man’s land while the man was gone, and the neighbors found him and rather than outright killing him, put him on his horse with a noose around his neck, thus avoiding killing him themselves. Mary Bee, knowing that she could not handle the four mad women by herself, agreed to save Mr. Briggs if he would do whatever she asked.  He consented and, in that way, she got a companion to travel with her.

The journey was full of hardships, including Indian attacks, and bad weather.  And, of course, two very different people traveling very close together.

I was surprised by how taken I was with this story.  The stories of the four mad women were fascinating.  The story ended up much differently than expected.  One of my book groups read this and the other members did not like the ending.  I kind of did like it…it was quite unexpected and it contrasted strength and resilience.

The very most interesting part for me was reading the Afterword of the book.  The Afterword was written by Glendon Swarthout’s son and he described how the book was based on research and actual stories of the pioneer women.  Fascinating.
Posted by Sue F. at 10:49 AM No comments: