Three good reads for the cold winter days coming up!

Yes, the cold weather is beginning to settle around us here in central Illinois...we have been so lucky so far...even Thanksgiving day was in the 60's, but a cold wind blew in and it has been cold ever since!  The last three books that I have read are good ones for those cold winter days (and nights) coming up...all three are fairly easy, quick reads that will keep your attention! 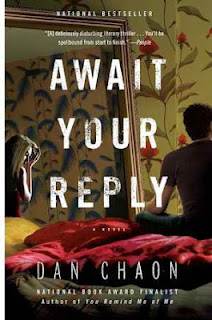 The first one is Await Your Reply by Dan Chaon.  This book had been presented, but not chosen at one of my book groups, but it sounded intriguing, so I suggested it for my other book group and we decided to read it.  It is basically three stories that don't really begin to tie into each other until near the end of the book.The first chapter introduces Ryan and his father Jay.  The second chapter introduces George and his girlfriend Lucy. And the third chapter tells of Miles and his twin brother Hayden. From then on, each chapter is about one of the three stories.  I have to admit that I only figured out half the mystery of the book!  It made for a great discussion!

Await Your Reply is about re-inventing one's self, over and over.  It is about identities.  It is a mystery.  The author does a quite skillful job of creating confusion and wonder as you read.  I enjoyed this book very much and am hoping that the ending means that a sequel may be in the works!

Once Upon A River by Bonnie Jo Campbell was chosen by my book group for our November meeting.  I also enjoyed it and look forward to reading more by the author.  The heroine of the story is Margo Crane, a sixteen year old whose mother took off one day and never returned.  Margo and her father remained on the river where they lived, until one day Margo is raped by her uncle.  That led quickly to the violent death of her father.  Margo was raised on the Stark River in rural Michigan and that was the only life that she knew and chose to live. After the death of her father, Margo set out to find her missing mother.  However, she had few leads and no one to rely on to help her.  She used her hunting and fishing skills to survive as she searched up the river for her mother.  Margo is a very strong female character, who seemed to have a kind of feral sense of survival.  She was a character who I ended up admiring, even though I didn't agree with some of her choices.  Good book. 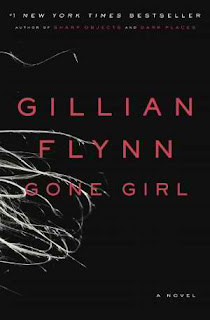 And lastly, I read Gone Girl by Gillian Flynn.  Talk about some messed up people and choices that they make!  This is a good mystery, although I have to admit it wasn't until about half way through the book that I got real interested in the story.  But after that, I couldn't put it down!  It's another mystery.  On their fifth wedding anniversary, Amy disappeared and by all evidence it appeared that her husband Nick killed her.  Each chapter ended with a new piece of evidence, theory or fact about the case. The story is an interesting case-study in relationships gone bad.  It was a fun read.

The End of Your Life Book Club 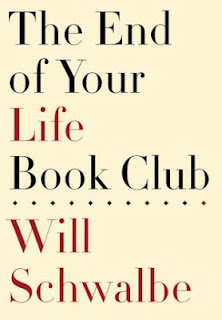 Oh, my, this book brought up so many emotions for me, especially in the beginning.  My mom died at the end of May this year and we had always shared books and love of reading.  Unfortunately, the last couple years of her life, between her physical health and her dementia, she lost the desire to read.  Actually, that is not accurate...she still wanted to read, but was too frustrated to try to keep reading the same page over and over and not retain what she had read.  Even in her last year, she asked to borrow The Help from me, but she never did open it up to read it.

The End of Your Life Book Club, by Will Schwalbe, is the story of his mother's  (Mary Ann) last two years of life after she was diagnosed with pancreatic cancer.  Mary Ann and Will had always shared their love of reading and books with each other.  As they spent increasingly longer hours together at doctor visits, hospital stays, chemotherapy, etc. they formed The End of Your Life Book Club, making what they had done for years an official thing.  Both were prolific readers and their choice of books to read together were fascinating. (Happily, the list of books is included at the end of the book)

As Will wrote near the beginning of the book:

"You could say that the book club became our life, but it would be more accurate to say that our life became a book club.  Maybe it had always been one-and it took Mom's illness to make us realize that.  We didn't talk much about the club.  We talked about the books, and we talked about our lives.

We all have a lot more to read than we can read and a lot more to do than we can do.  Still, one of the things I learned from Mom is this: Reading isn't the opposite of doing; it's the opposite of dying. I will never be able to read my mother's favorite books without thinking of her-and when I pass them on and recommend them, I'll know that some of what made her goes with them; that some of my mother will live on in those readers, readers who may be inspired to love the way she loved and do their own version of what she did in the world."


Mary Ann had a very full life.  She was an extremely active and interesting woman and continued to be through-out her illness.   The book is full of her wisdom that she passed on to Will.  And thankfully, he passed on to us.  As much as I love reading, this book made me even more grateful for the gift of reading.  It was so wonderful to read this personal journey of a son and his mother.  Thanks, Will.
Posted by Sue F. at 11:20 AM 1 comment: 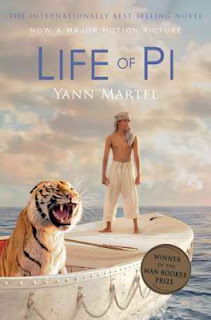 Yes, I am probably one of the last in the book reading world to have read Life of Pi by Yann Martel.  There were a couple of reasons for this...one, I didn't think the story sounded all that interesting, and two, I had read Yann Martel's book Beatrice and Virgil and wasn't all that taken with it.   I did like Life of Pi, but I was not thoroughly mesmerized by it as others seem to have been.  However, I definitely feel that if this had been a book that I read and discussed with one of my book groups, I would have probably enjoyed it much more.  That being said, I probably would get more out of it with reading it again, so maybe I will someday.  I am curious to see how the movie is.

If there is anyone reading this blog who has not read Life of Pi,here is a very brief, incomplete summary of the basic story:  it is the story of a young Indian boy, Pi, whose family owned/runs a zoo in India. Pi grew  up with all of the animals in the zoo, so he knew their ways, etc.  His parents decided to move to Canada and the ship they are traveling on sank.  Pi found himself in a lifeboat with a hyena, an orangutan, a zebra and a tiger.  The story is about how Pi survives.

There were two features of the book that I especially enjoyed.  I liked reading of Pi's spirituality and wanting to know God...he was a Hindu, and also became a Catholic and a Muslim...all because he wanted to know God better.  The spirituality of the book was quite touching and thought-provoking, in my opinion.  The other thing that I really liked about the book was how it went back and forth from the past and the present.  I didn't find that confusing at all, which is a sign of good writing! The book did win the Man Booker Prize award.

Would I recommend it?  Yes.  Will I read it again at some point? Yes again.