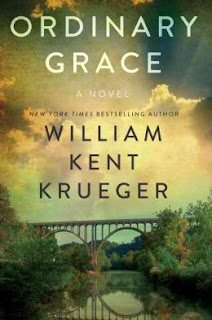 Ordinary Grace begins as a simple book narrated forty years after the summer of 1961 by Frank Drum, who in 1961, was a thirteen year old boy.  Frank lived in the small, quaint little town of New Bremen, Minnesota.

"It was a summer in which death, in visitation, assumed many forms.  Accident.  Nature.  Suicide.  Murder.  You might think I remember that summer as tragic and I do but not completely so.  My father used to quote the Greek playwright Aeschylus. 'He who learns must suffer.  And even in our sleep pain, which cannot forget, falls drop by drop upon the heart, until, in our own despair, against our will, comes wisdom through the awful grace of God.' "


Frank lived with his father, who is the town's pastor, his mother, who was rather distant, his eighteen year old sister Ariel, who was headed to Juillard in the fall of that year and his eleven year old brother Jake, who suffered from a disabling stutter.  The summer began with the gruesome discovery of a friend of Frank's who was found dead.  It was not clear if the boy was killed or if it was an accident.  And Frank wanted to find out the truth.  But soon after the boy was found, Ariel, Frank's sister, went missing. Frank had seen her leaving the house in the middle of the night several times.  The night she disappeared, she had been out with her boyfriend Karl.  Of course, all suspicion fell on Karl.  But like Ariel, Karl had his own secrets.

There are other characters in the book that play important parts in the book.  I don't want to give away much more of the story, so as not to spoil it for the reader.  I will say that the book invoked To Kill A Mockingbird for me somewhat.  It is told from a child's point of view, the father is a man of wisdom, and the children are innocent until that fateful summer.  The writing is just excellent.

Near the end of the book, Frank's brother, Jake, offered to say grace before a meal being served at the church.  Because of how much Jake suffered with his stuttering, Frank's reaction (said to himself) was :

But Frank's mother put her hand on Jake's shoulder and Jake spoke:

"'Heavenly Father, for the blessings of this food and these friends and our families, we thank you.  In Jesus's name, amen.'
That was it.  That was all of it.  A grace so ordinary there was no reason at all to remember it.  Yet I have never across the forty years since it was spoken forgotten a single word."


The book ends forty years later, when Frank went to the cemetery with his father as they did every year. There is one grave that Frank would like to visit but it was not there.  It was of Warren Redstone, an Indian man who Frank and the town had initially suspected of the crimes. When Frank was in college, he had located and visited Warren:.

"We didn't say much more.  With the exception of the summer in which our lives had converged in a few dramatic moments, we had almost nothing in common.  But when I left, Warren Redstone offered something I've never forgotten.  As I walked away he called to me and when I turned back he said, 'They're never far from us, you know.'
'Who?' I asked.
'The dead.  No more'n a breath.  You let that last one go and you're with them again.'"


This book is so full of beautiful writing:

"In the end maybe that's what the summer was about.  I was no older than Bobby and didn't understand such things then.  I've come four decades since but I'm not sure that even now I fully understand.  I still spend a lot of time thinking about the events of that summer.  About the terrible price of wisdom.  The awful grace of God."


This is a book that I will read again and again over the years.

So Many Books to Read

I have many, many book piles around my house of books that I want to read, but the pile of I want to read them now is killing me with desire!  I keep those books by my bed...that is the most luring pile of all.  What is there right now?

Defending Jacob by William Landay (which is our July book group read, so it will be probably next)

The Art of Hearing Heartbeats by Jan-Philipp Sendker (if I am being really honest, it is most likely to be read next!)

And, sadly for my wallet, I will be heading to the used bookstore this week to pick up The Alchemist by Paul Coelho because I also am dying to read it! What makes this sad for my wallet is that I rarely leave there with only one book, no matter how firm my intentions may be.

I would love to hear from others what books they have on their want to read soon piles!
Posted by Sue F. at 1:31 PM 1 comment:

I read The Dinner by Herman Koch a few weeks ago...it was the book chosen for June's book group, and 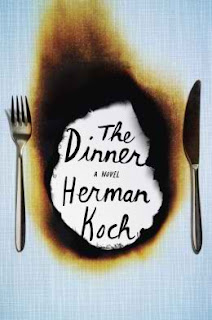 we met last night to discuss it.  Earlier last week, a friend had asked what we were reading and I had told her that the book was good, but that I wasn't sure that I would necessarily recommend it to anyone, but that I thought that it would lead to a good discussion for the book group.  I was right about the discussion!

The book is about a dinner that takes place at an elegant, expensive restaurant in Amsterdam.  The narrator of the story is Paul who with his wife Claire met up at the restaurant with Paul's brother, Serge and his wive, Babette.  The brothers appear to be quite different from each other. Serge was an up-and-coming candidate for prime minister; Paul was an unemployed teacher.  They met at the restaurant to discuss their fifteen year old sons.  The dinner began quite pleasantly with discussion of movies, wine, etc.As dinner progressed,  the conversation moved to discussing a horrific incident that their sons had been involved in which the police were investigating.

Through-out the story, Paul goes back in time to talk about incidents in his past, which began to explain his and Claire's relationship and history.  As the incident involving the boys is discussed, Paul and Claire's history lends one to examine what role these parents have played in their son's life.

By the end of the book, the glaring question in the reader's mind becomes "How far would I go to protect my child?".

The book is thought-provoking and interesting.  However, I found none of the characters likable, which I am sure was the intent of the author.  For me, that makes it a hard book to recommend.

I'm a big fan of Tana French's novels...mysteries set in Ireland...so I was anxious to get her latest one, , from the library.  It's a good mystery, and a long book, so be prepared.  This one features detective Mikey "Scorcher" Kennedy, a detective who works the Dublin Murder Squad.  Mikey ( who was also in Faithful Place) and his new rookie partner, Richie, were assigned to a murder case out in the newly developed seaside area, now called Brianstown.  Brianstown is an up-and-coming development that was stalled as the economy took a dive.  Years ago, the area was called Broken Harbor, an area that was poor and undeveloped, where his family went for vacations.  As it turned out, the area has a lot of old, painful memories for Mikey. 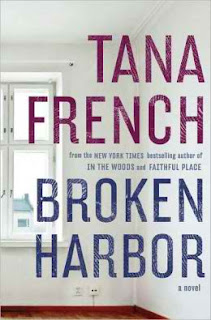 The murders that Mikey was sent to investigate was of two young children and their father.  The children's mother had survived and was hospitalized. Evidence pointed to the father as the killer.


As Mikey investigated the murders, he also had to deal with his mentally ill sister, and his memories of his mother and her death.

The book was good...I enjoyed the mystery part of the book, but I was disappointed in the family history part of the story.  I wanted more.

I have to be honest and fair here...I have read all of Ms. French's book, and while I would recommend all of them, her first, In The Woods, remains my favorite!
Posted by Sue F. at 1:28 PM No comments: