So far this month I have read five books.  And so far, they have all been winners in my opinion!

I have to begin with the new book by one of my favorite authors.  The Bone Tree by Greg Iles came Natchez Burning (the first book) last year. 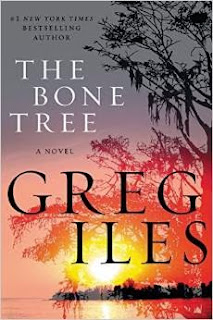 out last month.  It is the second book of a trilogy and I had very anxiously been awaiting it since reading

The Bone Tree picks up where the story ended in Natchez Burning.  Iles does a good job bringing a new reader up to speed on the story that one may have missed if they hadn't read the first book.  The catching up seemed too long to me, but that was probably because I had read the first book.

Penn Cage continued to search for answers regarding the civil rights murders that had occurred in the Natchez area during the 1960's.  His father, Dr. Tom Cage, was in hiding after he had jumped bail on the charge of murdering his former nurse who had returned to Natchez after years away.  Meanwhile, Penn was dealing with the Double Eagles, an extremist sect of the Ku Klux Klan.  The "Bone Tree" was supposedly where the murders either occurred or where the bodies were taken.  It was rumored to be deep in the Mississippi swampland.  Penn and his fiancee, newspaper writer Caitlin Masters, were hot on the search for the bone tree.  Meanwhile, it was also rumored that the Double Eagles had been involved in the assassination of JFK.  However, Penn is mostly concerned over learning where his father was hiding out and trying to save his life.

It was a good read, and one of the main characters died, which really surprised me.  However, it wasn't quite as riveting as Natchez Burning.  I expect that the third book of the trilogy, Unwritten Laws, will be, though.  I really can hardly wait for it to come out.  It is expected out in 2016.

Galore by Michael Crummy was our May read for one of my book groups.  And this book is a great 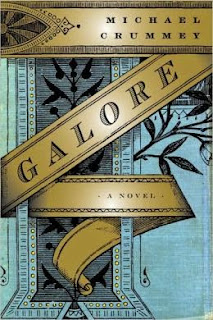 example of why I love my book groups...Galore is a book that I don't think that I would have ever picked up and read on my own.  It's very different.  I loved the story, but had a quite difficult time keeping the family genealogy straight as I was reading.  And there is even a family chart included in the front of the book!

The story begins with a beached whale found on the shore of Paradise Deep.  The people of the village waited until the whale died, then began butchering it for the meat, fat, etc.  What they never expected to find was a man inside the whale.  He smelled of fish and did not speak, but he was alive.   the townspeople decided to call the man Judah.  Because of his smell, he had to live alone.

Judah was not the only unusual character in the town....The Sellers family and the Devine family were both full of interesting characters, who interacted with each other through-out the decades.

The book is divided into two parts.  Part One may have taken place in the early 1800's (we never determined exactly when, but before the Civil War), and Part Two picked up just before WWI.

There was so much to all of the different stories of the various people in this book.  Besides the two families, there was also a priest and a doctor who both figured in the stories.  Galore was a story of love, bitterness, feuds, and finding ones' way.  I really had never read a book quite like it.  As you can probably guess, there are many Biblical similarities in the stories.  The book made for quite interesting discussion for our book group! 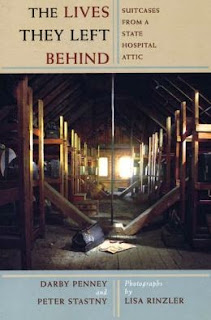 In my last blog entry, I reviewed the book What She Left Behind.  I read that the novel had been based on The Lives They Left Behind by Darby Penney and Peter Stastny. I immediately had to order it and read it.  The Lives They Left Behind is the true story about the actual Willard State Hospital in New York that had opened around 1869.  After it closed in 1995, it was discovered that there were more than 400 suitcases left in the attic of the hospital.  These suitcases were brought with a patient when they were admitted to the hospital, then stored in the attic (along with the belongings in the suitcase) until the patient left, which didn't usually happen.  The authors chose ten of the suitcases that were found there and examined and researched the lives of the owners of the suitcases.
off a book called

The Lives They Left Behind is a fascinating look at the lives of ten people and how they ended up at the state hospital.  It's moving and sad, and unfortunately, so true of the treatment history of mental illness.

I am a huge fan of Tom Brokaw.  His newest book, A Lucky Life Interrupted, is the story of his battle 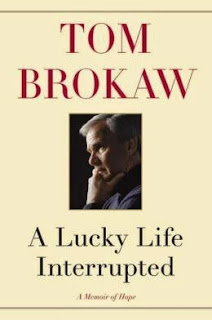 with cancer.  He began by struggling with his back aching, which initially he attributed to his age and active lifestyle.  And as he wrote, he was always known as "the lucky one", so he didn't really believe that anything bad would happen to him.  Doctors persisted and it was found that he had Multiple Myeloma.  A treatable cancer, but not curable.

The book does a good job telling of what Brokaw had to go through and endure, from diagnosis to remission over about a years time.  Interspersed in the book, are stories from his life and career that I found intriguing.  I also found the book to be surprisingly personal.  It's an easy read and, in my opinion, well worth it!

And finally, I read Everything I Never Told You by Celeste Ng. I read this on my iPad (the first novel that I have read on it) since I was traveling and had already read the two books that I had brought with me.

The story begins with:

“Lydia is dead. But they don’t know this yet.”


So, you know right off the bat that Lydia is dead!  The story is about a Chinese American family 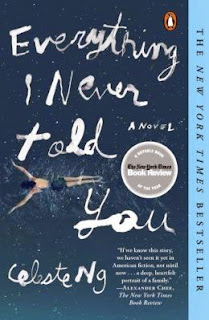 struggling to deal with the death of their beautiful, talented daughter.  Lydia's body was found in the lake in the small town where they lived. Lydia did not know how to swim and never went into the water, so her parents were convinced that someone had killed her. Lydia's brother is sure that their teenage neighbor was involved in Lydia's disappearance, and Hannah, the youngest, is rather left alone to deal with everything going on.

As would be expected, the family began to fall apart dealing with the loss of Lydia.  Secrets came out, mistakes were made as the family went through their grieving, and trying to understand and make sense out of everything.  It was a good book, easy to read.

So begins this exquisite novel about a Chinese American family living in 1970s small-town Ohio. Lydia is the favorite child of Marilyn and James Lee, and her parents are determined that she will fulfill the dreams they were unable to pursue. But when Lydia’s body is found in the local lake, the delicate balancing act that has been keeping the Lee family together is destroyed, tumbling them into chaos. A profoundly moving story of family, secrets, and longing, Everything I Never Told You is both a gripping page-turner and a sensitive family portrait, uncovering the ways in which mothers and daughters, fathers and sons, and husbands and wives struggle, all their lives, to understand one another.