The Memories We Keep 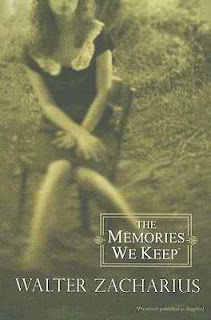 The Memories We Keep by Walter Zacharuis is the story of Mia Levy, who began life as a young Jewish girl from Poland.  Mia was headed toward a career as a pianist until WWII approached, and Mia's family began to see what was happening in their small town.  However, by the time Mia's father decided that the family must leave, it was too late and instead of boarding a train to safety, the family was on a train to a work camp.  Mia escaped from the train and began her journey of survival, going to New York, where an uncle had gone.  There Mia met the love of her life, Vinnie, a fellow musician.  However, Mia could not forget that her parents and brother were taken to a work camp, and she found a job that allowed her to join the Resistance in Paris, leaving Vinnie behind, as she tried to learn what had become of her family.

I finished the book, but was disappointed in it.  The life Mia lived in Paris seemed a bit unrealistic to me (although I don't doubt that some may have lived that life).  And the ending of the book was hard to believe (I won't share it here in case someone wants to read the story).
Posted by Sue F. at 4:30 PM No comments:

A Prayer for Owen Meany 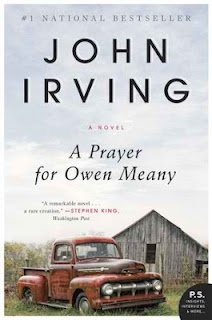 Yes, I know...this is an "older" book, written by John Irving, but, oh, what a book!  I first read it in either 1989 or 1990, soon after it came out.  It was chosen by one of my book groups for our June read and it was such a pleasure to read it again!   To those readers of this blog who have read it before, be open to re-reading it!  It is that good.

Just to get you started, here is the first line of the book...one of the greatest first lines ever....


That first line essentially sums up the story that the book tells. The book is the story of Owen Meany's life after he hits a foul ball during a Little League baseball game and kills the book's narrator's mother.  Owen does not believe that there are accidents in this life.  And he believes that he was put on this earth for a specific reason.  He has dreams of his death and believes them enough that he has his date of death engraved on a tombstone, long before he dies.

The book is about faith, friendship, death, and salvation, with humor and mystery included.

A Prayer for Owen Meany is a long book, but worth every minute!  I encourage you, reader, to indulge!
Posted by Sue F. at 4:17 PM No comments:

I know that it has been awhile since I posted...I have read a number of books over the last few weeks while sitting with my mother who had surgery on April 19th, and died May 29th.  It was a long six weeks.  I have to thank my mother for many things, but one of the best is the love of reading that she instilled in me.  My mom was a great reader and I remember her reading through-out all of my life.  Thanks, Mom!

Just very brief summaries of what I have read recently:

How Green Was My Valley by Richard Llewellyn was written in 1939.  It was one of the classics that my book group chose to read.  A classic story of a coal mining town in Wales.  The story is told by Huw Morgan as he reminisces about when he was younger.  It is a good story, but the book was somewhat difficult for me to read due to the dialect. An example: "There is good it did taste, too".  However, all in all, the story was a good one. 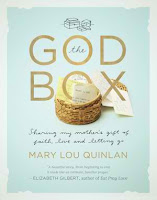 The God Box by Mary Lou Quinlan was a little difficult to read while I was going through my mother's illness, but I found it very inspiring.  When the author's mother died, Ms. Quinlan found her mother's God Boxes, as she called them.  Each was filled with hundreds of slips of papers on which her mother had written prayers about any and all that was going on at that time.  The prayers spanned a twenty year period. The book was quite touching.

Drop Dead Healthy by A.J. Jacobs was hilarious.  The subtitle is "One Man's Humble Quest for Bodily Perfection". The author wanted to became the absolute healthiest that he could.  It wasn't about losing weight or getting into shape, but about being healthy.  He consulted with various experts on numerous issues and, over two years, worked on each issue.  For example: if he wanted to work on hearing,  he would consult some hearing experts and try the various suggestions, practices, techniques, etc. that he was given, even as they might contradict each other.  It was quite interesting as he went through each section of his body and studied/consulted on how to be the healthiest.  Meanwhile, his poor wife had to endure his trying all the different ideas...it really was funny!

Jane Eyre by Charlotte Bronte was another book group choice.  It had been years since I had read it and what I was most struck by was how difficult it was to read!  I felt terrible...one summer vacation I made my two daughters read it...what was I thinking?  Another good story but way too long...

The Given Day by Dennis Lehane...I read this based on my enjoyment of several of his other books.  I thought that this book was by far, the best of his that I have read.  It takes place shortly following WWI and follows two families, one black and one white.  It is primarily about some Boston police officers, one family in particular and covers the period of time when the Boston police were attempting to unionize.  It was a great story following several families.

The Skinny Rules by Bob Harper is a book by one of the coaches on The Biggest Loser with his twenty rules for losing weight.  There is nothing new in the book, the rules are all common sense, but he does an excellent job at breaking them down into sensible, reasonable rules for living.  An excellent book that I hope will help me lose weight!
Posted by Sue F. at 12:14 PM 1 comment: