Wilderness is the debut novel of Lance Weller.  I look forward to more novels from this author! I am a 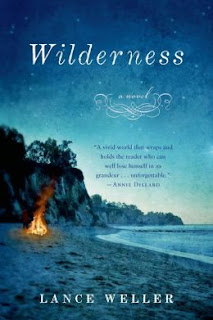 little biased in that I love novels concerning the Civil War and this is a little more than just about the War in that it is also dealing with the aftermath of the War.

The novel begins with a Prologue titled "Rise Again 1965".  A woman, Jane, woke in her nursing home, remembering her three fathers:

"The man who was her father for five years and who was killed along with her mother high in the mountains.  And Jane Dao-ming sees again her second father, Abel Truman, who found her there and who brought her down and whom she knew for two days and who gave her vision to replace sight.  By the window in her studio, her breath comes hot and catches high in her chest to think of him and of her third and final father, who raised her with her second and final mother.  This third father, Glenn Makers, who adopted her and taught her what she's need to know to survive in a sighted world-arithmetic and how an apple feels when ripe and sweet and how the quality of light differs by season and by temperature-and who was hanged by the neck until dead from the branches of a black cottonwood on the banks of the Little Sugar Creek by a man named Farley for the simple reason that he was a black man with a white wife."

She recalls asking Glenn, her third father, about Abel Truman.  Glenn told her:

"Skin started it," he finally told her.  "That war.  You know that.  Skin started it, but there was more to it than just skin, and even though Abel fought for what he fought for, you can't take a man out of his time then expect to understand him.  That's just not something you can do.  Like the war, there was more to him than just the side he was on."

The novel is the story of Abel Truman, who had fought for the Confederacy, and headed to the Pacific after the War, trying to get away from all the memories and feelings. The story goes back and forth between 1864 and 1899.  In 1864 Abel had fought at the Battle of the Wilderness, where he was severely wounded.  In 1899, Abel was nearing the end of his life.  Before the War had started Abel had lost his infant daughter and his wife.  Those losses, along with his experiences during the War, haunted him for the rest of his life. Redemption figures in both times...from 1864 Abel comes to the realization that fighting a war over color of skin is wrong, and from 1899 Abel told a story of being human and surviving, along with caring for others.

The novel tells of an old soldier's heading "home", retelling his story and memories, good and bad.   I thought the writing was superb.  Great story!

I recently completed reading three books recommended by various friends.  And while they were all good stories, none of the three really grabbed me.  I guess my taste is different from many others?  I don't know...it could be that I had just come off reading two very excellent books, and so these three didn't seem to meet the standard of the two before???  So readers, that may mean that you will find these three books to be quite good, so don't let my take on them slant or influence your decision to read them or not.

First one-The Language of Flowers by Vanessa Diffenbaugh.  I did enjoy this book until the very end, 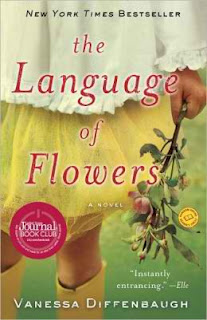 when I felt as if it ended all too perfectly for the main character, Victoria.

Victoria was a young girl/woman who had grown up in the foster care system.  When she aged out of the system, she was alone, trusting no one and living out on the street.  She realized that perhaps her love for flowers and the meaning of flowers could be put to use in a flower shop.  As a child, she had received a book that had the meaning of flowers and she seemed to have a gift for using that knowledge.  So when she observed a woman who appeared to own a flower shop nearby, she offered her services.  However, while doing the early morning shopping at the Flower Market, she noticed a boy about her age and as they began to get to know each other, she learned that he was a connection to her past that she did not want to remember.  Now Victoria was faced with the dilemma of facing her painful past or letting go of her chance of happiness with Grant (the boy).

As I said, it was a good story, just ended too predictably.  We did end up having a good discussion about the book at book group...lots to examine as far as the foster care system and how that can affect a person's life, etc..And I forgot to add that at the end of the book is "Victoria's Dictionary of Flowers", which I found fascinating!

Next I read The Art of Hearing Heartbeats by Jan-Philipp Sendker.  I did like this book, and the 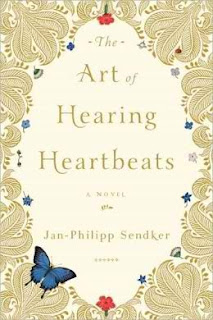 ending  had a bit of a twist, which was a nice surprise!

Here's how the story started:

"The old man's eyes struck me first.  They rested deep in their sockets, and he seemed unable to take them off me.  Granted, everyone in the teahouse was staring at me more or less unabashedly, but he was the most brazen.  As if I were some exotic creature he'd never seen before."

Julia had gone to Burma to learn more about her father who had disappeared four years earlier.  She did not know much about his earlier life, other than he was Burmese, had come to America, and  married her mother.  He worked as an attorney.  When Julia arrived in Burma, the old man approached her and said:

"Julia Win. Born August 28, 1968, in New York City.  American mother.  Burmese father.  Your family name is a part of my story, has been a part of my life since I was born.  In the past four years I have not passed a single day without thinking of you.  I will explain everything in due course but let me first ask you my question: Do you believe in love?"


Julia's mother had given her a letter that had been written by her father in 1955 to a woman named Mi Mi.  The letter was addressed to Kalaw, a village in Burma.  The letter is all that Julia has to link her father to his past, so she leaves for Burma in search of her father, or news of him.  The old man, U Ba, approached her and began to tell her stories about her father, including his blindness as a child, and his love and devotion to Mi Mi. Mi Mi is unable to walk.  She became Tin Win's eyes, and he became her legs.  When Julia arrived in Burma, it had been 50 years since Tin Win had left Burma.

There was wisdom in this book.  At one point, Tin Win was being taken to a monastery by his "adopted" mother to learn from an eighty year old blind monk...

"Sy Kyi was hoping he would be able to take Tin Win under his wing, too, to coax him out of the darkness that beleaguered him, to teach him what he had taught her: that life is interwoven with suffering.  That in every life, without exception, illnesses are unavoidable.  That we will age, and that we cannot elude death.  These are the laws and conditions of human existence..."


Okay, despite what I said earlier, this was a good book and I do recommend it.

Lastly, I read The Alchemist by Paul Coelho. I know that it has been a wildly popular book, but I just 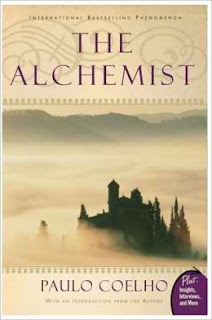 didn't see it.  While it is not a bad book by any means, it just seemed like a very simple tale that could have been told as a short story.  Perhaps I am wrong.

The Alchemist is the story of a young shepherd boy seeking treasure.  He travels around to find his treasure.  I won't share the ending (moral of the story), but just think Wizard of Oz.