As you know if you read this blog much, I am a fan of Joyce Carol Oates, so when I came across The 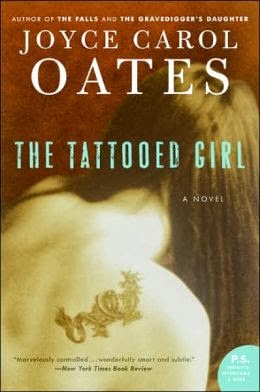 Tattooed Girl at the used book store I grabbed it.  I had not heard of it, so thought I would try it.  It definitely is not one of my favorite of her books, but it was good and has some very interesting things to ponder and consider!

Joshua Seigl was a young mid-thirties author who was single and not in great health.  He decided that he needed to hire an assistant to help him begin to get some organization of all of his files and writings from the past many years.  He interviewed many males and was not satisfied with any of them.  Then one day in a bookstore, Joshua came across Alma, a young woman who had recently begun working there, but didn't seem to be working out.  Something about her interested him.  She had tattoos on her hands and arms, but what Joshua found fascinating was a tattoo (or was it a birthmark?) on her face.  He decided that he wanted Alma to be his assistant, even though he knew nothing about her, and she agreed to take on the job.

Alma appeared to be quite devoted to the job, but presented herself as a very simple, uneducated woman.  Unbeknownst to Joshua, Alma harbored deep hatred toward Jews.  She had a troubled past and was not really who she presented to be.  However, she appeared very loyal to Joshua.  As they worked together they began slowly to get to know each other and learned more about each other.  More importantly, they began to learn more about themselves.

It was an interesting book...made me think about some issues that were in the book.  It was worth reading, but I am not sure that I would wholeheartedly recommend it to everyone.

I picked up Iron House by John Hart because I had read The Last Child, also written by him, in 2010 Iron House did not disappoint.  It was a story that after I got a bit into it, I could not put it down...love reading a good book that you can't even stay away from! 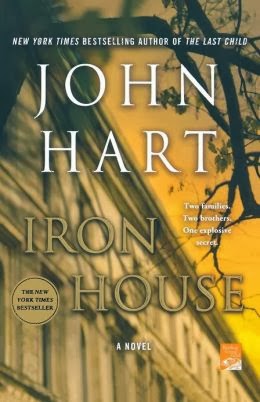 and really enjoyed it.

Iron Mountain Home for Boys was an orphanage that brothers Michael and Julian were placed in as young boys.  Michael was the older and looked out for Julian, who was not only younger but was also described as rather weak and sensitive.  The Home appeared to be one of survival of the fittest, with lots of bullying and violence going on.  One night, a young boy was brutally killed, and so that Julian wasn't blamed, Michael took off and ran away.

Julian was adopted soon after, but Michael stayed missing.  Michael had made his way to New York and was eventually taken in by a generous wealthy man, who is involved in organized crime. That becomes Michael's life.  Twenty years later Michael met Elena and wanted out of the business.  The old man was dying, and seemed to respect that Michael wanted out and gave Michael his blessing. However, after the old man died, his son vowed to come after Michael and threatened to also come after Michael's beloved brother, Julian (whom Michael had not seen since the night he ran away from the Home).

So Michael and Elena took off in search of Julian and the story really gets intriguing!

I found this book to be a great mystery.  I really enjoy Mr. Hart's writing.

"We can all live with doubts.
It's the knowing that breaks us."

This is interesting...one of my book groups chose Still Alice by Lisa Genova to read for our February 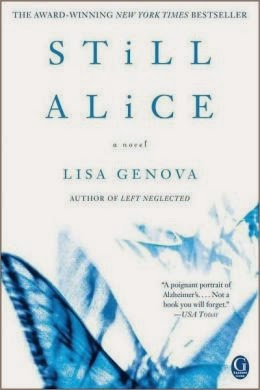 meeting.  I had missed the meeting two months before when the book was chosen.  I would have not voted for it, since I had read it in May of 2010 and didn't especially care for it then. But this is a case of re-reading a book and changing your mind!

When I had read it in 2010, my mother had just been diagnosed with Alzheimer's and she wanted me to read it.  That is why I did, and at that time, I just couldn't relate it to my mom.  Well,  my mom died in May of 2012, so there were two years of watching her decline with this disease (although it wasn't what she died from). Reading Still Alice this time was a whole different experience for me.

The story is about 50 year old Alice, a psychology professor at Harvard, who begins to be aware of memory problems.  She is diagnosed with early onset of Alzheimer's.  The book tells of the struggles of Alice, her husband John and their three grown children as they deal with the diagnosis and the in-their-face reality of Alzheimer's affecting their wife/mother.
For some reason, I had thought that the story was a true story and that the husband narrated it.  I was totally wrong.  It is a novel and told by Alice herself.  I found the writing to be rather simplistic and never felt like I really knew the characters.  It was an easy read and there is a lot of information about Alzheimer's in the book.  Again, I guess that I would recommend it, also.

Of course, the story is the same, but seeing it through different eyes changed the story for me.  This time, I felt like it was a beautifully written portrayal of how a person experienced both the diagnosis and the disease itself. And how Alice's family experienced both.  Alice and her husband, John, had three grown children.  Alice was a fifty year old cognitive psychology professor at Harvard who began slowly realizing that she was forgetting things. On the day that she went out for a run and found herself at Harvard Square and did not know where she was she knew she needed to see a doctor and find out what was going on with her.  This was in September 2003.  The book progresses through to September 2005, so it is about the first two years of living with her disease.

After watching my mother (who was about eighty when diagnosed) I found the book very insightful and moving.  I was especially touched by the ending of the book.