Yes, 2018 marks ten years since I started this blog.  So now, I am wondering, should it be "Happy Birthday, Blog", or "Happy Anniversary, blog"? I am happy to report that I still enjoy doing it, maybe even more than when I began!  It is really hard to believe that I have been at it for ten years!

My goals for 2018?  Well, I'd like to get fifty books read, but knowing that I have four more of the Outlander series to read makes that goal difficult.  But I'm more that willing to try! I do know that sometimes I forget to add books either to the blog or to Goodreads, so I need to try to be better about tracking my reading to increase my numbers and to be more accurate!

Maybe I will even make a dent in my TBR piles.  Oh, who am I kidding?  Those piles will just get bigger.

So maybe I just need more beach time. Now, that's a goal that I am willing to work hard at! 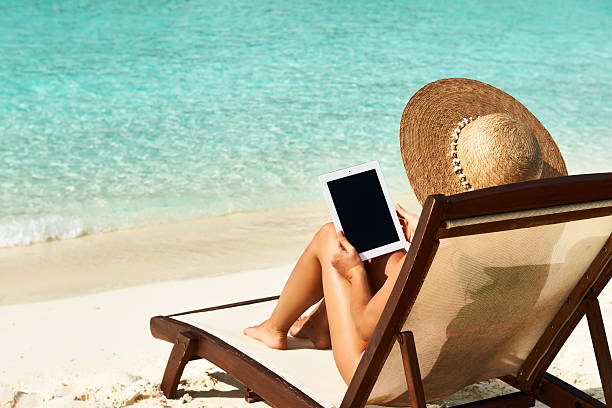 It's hard to believe that 2017 is ending tonight!  [This has been a wonderful year personally, but it has also been a most difficult year for our country and I am very glad to see it end. I'm hopeful that much will change for the good in 2018.  I know that I plan to work hard at making that happen.] Okay, so politics aside, back to reading!  It's been a great year for reading for me, although my numbers appear somewhat low.  I am blaming that on the fact that I read four of the Outlander series books this past fall and each one of them is over one thousand pages.  So, just to put it out there, I think that they should each count as two books read! But that's not how this works.

My stats? I read forty-five books this year, with seven of them being non-fiction.  That in itself must be a record for me! So, as I do each year, I will begin with my favorite books and break it down to number one.  This year I will also share my favorite non-fiction separately.

I begin with my favorite sixteen books:

Two of these books are mysteries, and one is non-fiction. Authors are equally divided as eight men and eight women.

To break the list down further, my top favorite eight books were:

It's interesting that Elizabeth Strout's book My Name Is Lucy Barton was on my list last year. Good author!

And now it gets harder-the top four:

I have to say that now it is between Memory and Days Without End.

And I have to go with Memory by Philipe Grimbert. It's not a new book, but something about this story touches me each time I read it. And here's the crazy thing...I just looked at last year's top book and it was Memory. So perhaps it should not be on the list. So by default, I guess Days Without End wins! Maybe I won't read Memory next year, so I don't have this issue!

My two favorite non-fiction books that I read this year were Evicted and Just Mercy.  I highly recommend them.


So there you have it.  I hope this list of favorite books helps with your reading.  I always love to see what books are rated highly by other readers.  I hope you do, also!
Posted by Sue F. at 11:10 AM No comments:

The Optimist's Daughter by Eudora Welty was written in 1972 which is when I first read it and loved it.  It was chosen for one of my book groups December read.  It's always interesting to go back and re-read a book that you remembered either loving or hating to see how the book affects you after time.  I didn't especially love the book this time reading it, although it is a good story and made for good discussion in book group.
This is a short novel that takes place in New Orleans.  Laurel is a young widow living and working in Chicago who is called back to New Orleans when her father, Judge McKelva, was going in for surgery for a detached retina.  Her father had been widowed and remarried a woman younger than Laurel.  His new wife, Fay, is a very self-centered woman who was quite put out with the Judge for going into the hospital and putting her life on hold while he had surgery.  Needless to say, Laurel finds Fay quite difficult.

Sadly, the Judge does not recover from the surgery and the family was told that he was dying.  After he died, he was taken back to their small town where Laurel and Fay had to deal with each other as they came to some kind of understanding of where each stood.

There are all kinds of family dynamics going on in this novel!  Not only does Laurel have to come to terms with her father's death, but also giving up the family home and the memories of her mother there.  It's a good book and was worth the re-read.

It is interesting to note that this book won the 1972 Pulitzer Prize for Fiction!

I really enjoyed The Alice Network by Kate Quinn and have already recommended it to others.  It's nice to come across a book like that! I wish that I had known the back story before I read it though.  If you are like me, read the author's note at the end of the book for the back story.

The story began with Charlie in 1947.  Charlotte St. Clair was a pregnant, unmarried college girl from New York who was going to Switzerland with her mother to take care of her "little problem".  However, Charlie had a different agenda, which was to try to find her cousin Rose who the family had lost contact with during the war.  Rose had lived in France and Charlie, along with her family, visited Rose's family every summer. However, during the war Rose disappeared in France which was Nazi occupied at the time.  Charlie had done some research before leaving the US and had a name of a woman who may have known something about what happened to Rose.

That woman was Evelyn Gardiner, an English woman living in London.  In 1915, Eve wanted to fight the Germans and was recruited to become a spy.  She joined the "Alice Network" working in enemy-occupied France.  Eve was given a new name, and worked under "Lili" who was considered the "queen of spies". Eve began working in a restaurant in a small town where the German soldiers gathered and there she began gathering information to pass on to Lili.

By the time Charlie finds Eve, she was living alone, isolated and drinking all the time.  But Charlie mentioned a name and unbeknownst to her, it was the same person that Eve wanted revenge on from thirty years ago.

It's a fascinating story and did not end predictably.  I was kind of hoping for a different ending and I was wrong, but not necessarily disappointed.  The actual ending of the story was probably more realistic than where my guess had gone.  Okay, not probably.

As I said at the beginning, be sure to read the author's note at the end of the book.  Very interesting story.
Posted by Sue F. at 12:43 PM No comments: 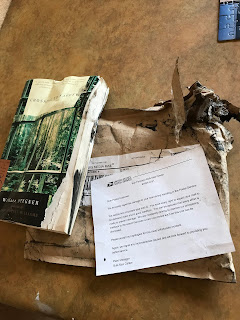 No USPS-I don't accept your apology for this "unfortunate incident". Apparently this book I ordered went through a fire, then was doused with water!
Posted by Sue F. at 12:16 PM No comments: 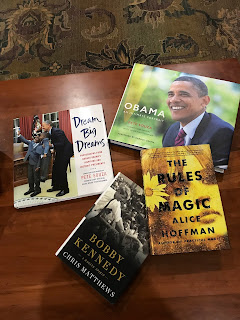 Merry Christmas to me!!!  Can't wait to get started on these!  Never mind the piles TBR sitting all over the house!!!
Posted by Sue F. at 12:12 PM No comments:

Two more in the Outlander Series

Over the last two months I completed two more books in the Outlanders Series.  I read Voyager and Drums of Autumn.  And again, I loved them both.  They continue the story of Jamie and Claire Fraser.  So now I am halfway through the series of eight books.  They are huge books averaging over 1000 pages each.  I am going to try to make myself take a break and get some other reading in.  I have been able to keep up with both book groups, taking breaks with the Outlander series as needed, but am always anxious to get back to them.   So, I have left off with the Frasers now in the United States, with the Revolutionary War looming.

If you have the time, I still highly recommend reading this series!
Posted by Sue F. at 9:14 AM No comments:

Half Broke Horses by Jeannette Walls is described on the cover as "A True Life Novel".  It is by the author of The Glass Castle and is about the author's grandmother, Lily Casey Smith.  If you have read The Glass Castle, you know that the author's mother had many issues, to put it politely.  Reading about the grandmother's life explains a lot about how her daughter, Rosemary, turned out.  Although, that is somewhat misleading and unfair as Rosemary had rather severe mental health issues that were certainly not caused by her mother.


Lily Casey Smith was quite an interesting woman.  She was born in 1901 in Texas and by age six was helping her father break horses.  Breaking horses  seemed to develop a theme for her life.

"The problem with half-broke horses like these was that no one took the time to train them."

It appeared to me that this was pretty much her parenting style.  She believed in training her children (certainly a good thing), but to the point that she ignored the children's desires, personalities, traits and abilities. She always seemed to be afraid that her children wouldn't be able to make it in the world.

Lily left home at fifteen when she was offered a position teaching in remote frontier country.  She rode her pony five hundred miles alone to take the teaching job in Arizona. Later she went to Chicago by herself to try to attend college to get a teaching degree and experienced hard times in the big city including a marriage that was a disaster.  Lily then returned to Texas, met and married another man, Jim Smith, and together they amassed a large ranch in Arizona. Over the years, Lily learned to drive a car and fly a plane and was a staunch advocate for women's rights.  She was an interesting, strong woman.

The story is written with Lily as the narrator.  The author wrote that she saw the book as an "oral history" and wanted it told with her grandmother's voice.

Kindred by Octavia Butler was a book chosen by one of my book groups.  It was an interesting story, but I was not taken with the writing.  It felt too simple, as if it were written for pre-teens maybe.

Kindred is the story of twenty-six year old Dana, a black women living in Califormia with her husband.  She was suddenly "taken" from her home and woke up to living in pre-Civil War times.  There she saved Rufus, son of a vicious plantation owner, who was drowning. When Dana's life seemed threatened she was sent back to modern times.  This scenario played out over and over, as Rufus grew to adulthood, but it was only a few months time for Dana in real life.  Confused?

I find it amusing that I can totally go along with time travel in the  Outlander series, but found the premise of Kindred ridiculous.