New additions on the blog site to check out!

I wanted readers of A Life of Books, my blog where I review books that I have read (or sometimes, just anything related to reading and/or books), to know that I have added two new features to the blog:

Search This Blog-this should allow you to search my blog for a specific book or author to see if anything has been written about either on my blog.  I am hoping that this will be a nice convenience for everyone.

Follow by Email-this should allow you to sign up with your email and receive a notice anytime I publish a new posting in the blog. It should be helpful if you want to follow all my postings.

Both features are placed at the top right side of the blog.

Please let me know if either does not seem to be working.

I hope these additions make following and reading my blog easier!
Posted by Sue F. at 10:54 AM No comments:

I read Memory by Philippe Grimbert years ago.  It was written in 2004 and translated to English in 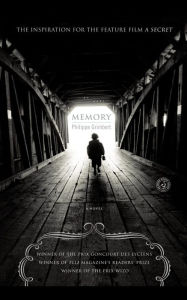 2007.  I came across it the other day as I was clearing out a few books to make room for others.  I didn't remember anything about it from reading it before, but it sounded interesting and I set it aside to read again.  I picked it up the other night after I finished the book I had been reading and read the entire book in a few hours.  It's a small book and I don't know why I didn't remember it, because this time reading it I was incredibly moved by it.

"Although an only child, for many years I had a brother.  Holiday friends and casual acquantances had no option but to take my word for it.  I had a brother.  Stronger and better looking.  An older brother, invisible and glorious."


The narrator tells the story as he knows it, of his parents meeting, courtship and marriage, occurring during the World War II. The family lived in France and the narrator was their only child.  He had an imaginary older brother. And so his life went on.  As he got older, one day in school, the children watched a documentary about the war.  One of his classmates began making fun of the film and the young boy became upset and slapped his friend, which resulted in a brawl.

He did not tell his parents the truth about his injuries from the fight, but the next day he confided in the family's old friend, Louise.  While he was telling her about the incident, he began sobbing. Louise also began to cry.

"The day after my fifteenth birthday, I finally learned what I had always known."


Louise told him his parent's story, and as the author wrote:

"Three dead people loomed out of the shadows.  I heard their names for the first time: Robert, Hannah, and Simon."


This is an absolutely beautiful book. And a heartbreaking story.  It was written twenty years after the author's parents had died by suicide.  It is the author's fictionalized true story of his parent's hidden lives.  It is quite simply, a very powerful book
Posted by Sue F. at 1:12 PM No comments:

The Signature of All Things

I read Big Magic by Elizabeth Gilbert recently, and since have finished her book The Signature of 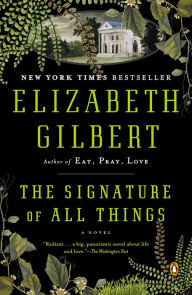 All Things.  It's a big novel that carries the reader over one hundred years and many places. Both of my book groups read it for our February meetings. It's an amazing story and kept me fascinated through-out.  It's a long book, 499 pages, but I couldn't stop reading it because I kept wanting to know what was going to happen!  Although, I have to admit, I had a bit of a hard time initially getting into it, but once the main character, Alma Whittaker, was born, I was hooked!

The story began with the telling of Henry Whittaker, Alma's father, who was born poor in 1760 outside of London.  Henry's father was an orchardman at the Kew Gardens which were favored by the King.  Henry was a rough boy, but was also intelligent and resourceful.  He was also interested in trees, like his father, and that is where Henry's success began, albeit not in a legitimate way-he began stealing specimens and selling them to interested buyers around the world. He was eventually caught, but was admired for his knowledge, so was not punished but exiled and sent to sea as an informer.  When he returned it was four years later (1780) and he had learned much, including how to pose as a gentleman. He was considered a man of botany and was then sent to Peru on assignment.  He spent about four years there, then went to work for the Dutch East India Company.  After working for that company for six years, he decided to  move to Philadelphia to live.  He chose a wife in Holland, the daughter of an old, respected botanist, and together Henry and Beatrix moved to America in 1793. By this time, Henry was a rich man.

Henry bought property and built White Acre, one of the finest properties in America.

"He wanted the place to pulse with extravagance.  He was not afraid to be envied."


He built a factory and a large warehouse by the harbor and went into business with a pharmacist.  Henry was in the business of producing medicine: "pills, powders, ointments and tonics". He had several glasshouses on the White Acre property where he cultivated Native American flowers for export.  "By 1800, he was easily the richest man in Philadelphia". And it was during that year Henry and Beatrix's daughter Alma was born.

"She was her father's daughter.  It was said of her from the beginning."


Not only did Alma look like her father, she was as intelligent as he ever was.  She paid great attention to him and learned everything from and about him.  She adored him. And she adored botany. She lived her privileged life on White Acres as the only beloved child until she was nine years old when one night a young girl was left at White Acres.  They called her Prudence and she was adopted by the Whittaker's, who had been unable to have another child after Alma.  And, according to Alma, after Prudence arrived everything changed.  As the author wrote:

"Henry waved his hand dismissively. 'Ah, you all make too much of Prudence.  To my mind, the homely one is worth ten of the pretty one.' So you see, it is quite possible that both girls suffered equally."


So Alma grew up with Prudence.  Prudence married and Alma was a botanist, left to live her life as a spinster at White Acre.  Until the appearance later in her life of Ambrose Pike, a man ten years younger than Alma, who was an amazing botanist illustrator.  He and Alma connected on a spiritual level, that Alma mistook for love.  Things got quite complicated and Ambrose left. I don't want to tell anymore of the story...

Briefly, the rest of the book tells the story of Alma's life and travels as she tries to learn more about Ambrose and their connection to each other.  It was fascinating, and I couldn't stop reading to learn more the farther I got into the book.

The writing was wonderful:

"In all of our lives, there are days that we wish we could see expunged from the record of our very existence. Perhaps we long for that erasure because a particular day brought us such splintering sorrow that we can scarcely bear to think of it ever again. Or we might wish to blot out an episode forever because we behaved so poorly on that day-we were mortifyingly selfish, or foolish to an extraordinary degree. or perhaps we injured another person and wish to disremember our guilt."


As for the title of the book? The author wrote:

"The old cobbler [Jacob Boehme] had believed in something he called 'the signature of all things'-namely, that God had hidden clues for humanity's betterment inside the design of every flower, leaf, fruit, and tree of earth.  All the natural world was a divine code, Boehme claimed, containing proof of our Creator's love."


The Signature of All Things also left one noting the signature of God in the relationships between people, too.  Fascinating book! 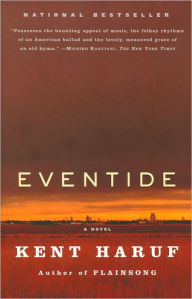 Hooray-I finally got Eventide, the second book in the trilogy by Kent Haruf.  It was preceded by the novel Plainsong. Eventide carries on in Holt, Colorado with some of the characters from Plainsong, notably, Raymond and his brother Harold, Victoria and her daughter Katie, and Tom and his boys. Several new characters and their stories are introduced, including DJ, a young boy who lives with his ailing grandfather, and Rose Tyler, a social-worker whose cases include Luther and Betty, a disabled couple and their children.

Like Plainsong, this is a simple, yet beautiful book about the ordinary lives of ordinary people.  There is love, heartbreak, grief and hope.  Haruf's writing is outstanding in that it really makes one care about the characters.  His prose is beautiful.

I let myself down by not ordering the third book (Benediction) before I finished Eventide.  But Benediction is on its way to me now!  Something to look forward to during these long awful winter months. 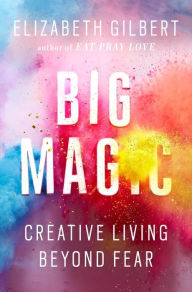 I was given the book Big Magic by Elizabeth Gilbert as a gift in December but didn't start reading it until later this past January. Shortly after I began reading it, I also began reading one of her other books that is fictional (The Signature of Everything).  That had seemed kind of odd, reading both fiction and non-fiction books at the same time by the same author! Big Magic is a non-fiction book (good for me!) that is about creativity. I found it very interesting and inspiring.  I wished that I were an aspiring writer reading it, but, sadly, that's not the case for me.  I thought it was a very encouraging book for anyone who wants to be creative in any form.  As I read it,  I often thought of how the book could apply to my knitting, genealogy and  journaling.  Actually, the full title of the book is Big Magic Creative Living Beyond Fear. And that, my friends, is what the book is about!

I will admit that the book was initially a bit hard for me to get into, but I stayed with it and thought that it became increasingly more relate-able.  And inspiring. I guess I shouldn't have been surprised at how much Ms. Gilbert's writing resonates with me.  I loved her book Eat, Pray and Love....I thought that book had some quite inspiring writing, also.

Part of what I loved about Big Magic was that she included not only her struggle to write at times, but also how other authors have struggled.  The authors were authors whose books I have enjoyed, such as Ann Patchett,  Harper Lee, and Barbara Kingsolver.  I loved all of the stories that were in the Big Magic.  And because I am currently reading The Signature of Everything, I especially liked her story about how that book began in her mind!

Big Magic is a very easy book to read.  The chapters/sections go from 1 to maybe 4 or 5 pages, so it's a good book to pick up, leave and come back to read.
Posted by Sue F. at 8:00 AM No comments: