I am a big fan of Joyce Carol Oates books.  Once in awhile, however, her books miss with me...just not Missing Mom is a hard book to put in a like/didn't like category.  There were a few parts that I found to be outstanding writing, yet most of the book was laborious, just-shoot-me reading.  The very beginning of the book put me in tears: 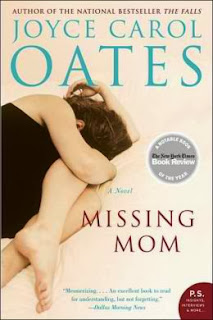 "Last time you see someone and you don't know it will be the last time.  And all that you know now, if only you'd known then.  But you didn't know, and now it's too late.  And you tell yourself How could I have known, I could not have known.
You tell yourself.

This is my story of missing my mother.  One day, in a way unique to you, it will be your story, too."


Anyone who has lost their mother would have to feel this.

This is a novel about Nikki Eaton, a thirty-one year old adolescent, who was still rebelling against all the her parents had stood for in their stereotypical middle class lives.

The novel is about the year following Gwen Eaton's murder and how Nikki dealt with missing her mother.  Nikki had been working as a small town reported for a local newspaper.  She was involved with an older, married man and worked at staying removed from her mother and sister, Clare.  One day, Clare called Nikki reporting that her mother was not answering her phone and her car was not at her home.  Nikki wasn't especially concerned about her mother not being where she was supposed to be and went on with her day.

"Since speaking with Clare I'd been waiting for the phone to ring but it had not rung.  I'd been waiting for Mom to call but Mom had not called.  And I was made to realize that, if Clare hadn't called to upset me, if Mom had called in her place, I would have peered at the caller I.D. screen, seen EATON, JON and probably would not have picked up because I was working; because I didn't want to be interrupted in my work.
And it came to me Here is what you deserve: never to hear your mother's living voice again."


Nikki left work and arrived at her mother's home and found her mother murdered in her garage.  And life changed for Nikki in that moment. Gwen's murder started Nikki on a path of examining her own life.

"Something ruptured and began bleeding in my chest when I bent over my mother, when I saw my mother in that way.  It will happen to you, in a way special to you.  You will not anticipate it, you cannot prepare for it and you cannot escape it.  The bleeding will not cease for a long time."

"It was the fate of mothers, to remember.  What nobody else would know or care about.  That, when they are gone, goes with them."

Would I recommend the book to others? Nope.  Will I read the book again? Nope.  I have already given you the best parts!
Posted by Sue F. at 10:08 AM No comments:

I was immediately taken in when I began reading The House Girl by Tara Conklin.  It is a debut novel 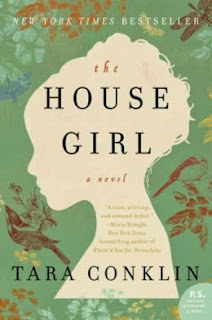 and I can't wait to read more of Ms. Conklin's work.  The House Girl debuted on the New York Times Bestseller List at number 29!

“Mister hit Josephine with the palm of his hand across her left cheek and it was then she knew she would run.”

The House Girl is about a slave, Josephine, a house girl for Miss Lu Anne Bell.  Miss Lu taught Josephine to read and to paint.  They would sometimes paint together.  Josephine had tried to escape a couple of years earlier and had been turned away at the safe house because she was nine months pregnant.  So she had been biding her time, waiting for the time she felt she could run away.  After her master hit her for absolutely no reason, she knew it was time to go.  The story started in 1852.

The book alternates between 1852 and 2004.  In 2004, attorney Lina Sparrow worked for a New York law firm and was offered the chance to work on a class action suit seeking reparations for the descendants of slaves.  In order to present a solid case, Lina was expected to produce a living descendant of a slave.  Lina lived with her father, Oscar Sparrow, a fairly well-renowned artist, who told Lina about an art show that was about to open that was featuring the work of Lu Anne Bell, an artist who had lived on a failing tobacco plantation before the Civil War.  The show was examining whether Lu Anne had actually created the featured paintings, or if they were in fact, the work of her house girl, Josephine.  Oscar suggested to Lina that perhaps a descendant of Josephine could be found for the law suit.

The novel is told in alternating chapters between Josephine and Lina.  Both of the women's stories are fascinating, and in different ways, share some similarities in the sense of identities, families, etc.

The novel seemed very well researched to me, and, as a genealogist, I was quite pleased by that.  But even more importantly, the novel was well-written, hard-to-put-down and really, what more could a reader want in a book?  It was a great read!
Posted by Sue F. at 2:00 PM 1 comment:

I have read quite a few of Jodi Picoult's books, and The Storyteller is one of her very best.  I could 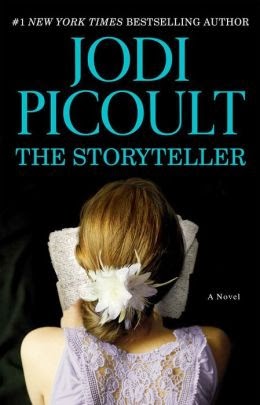 hardly put it down!  I especially enjoy historical novels about either the Civil War or the Holocaust, so I was anxious to read The Storyteller as soon as I had seen what it was about.

The novel is divided into three parts, and each part is divided into narrations by several main characters. There are also parts through-out the novel of Sage's grandmother's writing.

Sage was a twenty-five year old baker who began attending a grief group following the death of her mother.  There she met Josef Weber, who was dealing with his wife's death.  Josef was a ninety-five year old retired high school German teacher who was well-respected in the community.  Sage and Josef became friends and as Josef began to trust Sage he shared a long-hidden secret with her, and asked her to help him die.

Josef's secret shook Sage's world.  Sage was a Jew who had pretty much let go of her religion.  Josef's secret and request forced her to consider forgiveness, retribution, life, and death.  Sage's grandmother, Minka, was a Holocaust survivor who had written about her time in the camps.  As Josef shares more with Sage, she decides to contact Leo, a Nazi hunter, to help her determine if all is as Josef has claimed, especially to learn if Josef is who he says he is.

The story was very touching and quite interesting.  Reading Minka's time compared to Josef's time offered an unique perspective to the Holocaust events.

"There are so many ways to betray someone.

You can whisper behind his back.

You can deceive him on purpose.

You can deliver him into the hands of his enemy, when he trust you.

You can break a promise.

The question is, if you do any of these things, are you also betraying yourself?"

(Side note: this book hit number 1 on the New York Times Bestseller's List at the end of March 2013)