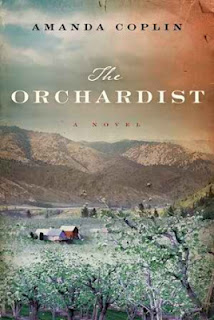 If you even can, imagine living in 1857, being nine years old.  That's when Talmadge, his sister, Elsbeth, and their mother traveled from the north-central part of the Oregon Territory into the far Northwest of the country.  Talmadge and Elsbeth's father had been killed in a mine collapse:

"When the mines collapsed, their mother did not even wait for the body of their father to be dredged up with the rest, but gathered their few belonging and set off with Talmadge and his sister at once.  They traveled north, and then west, west and then north."


The small family settled on some property that had two old apple trees. They planted some vegetables and barely existed.
Talmadge's sister, Elsbeth, was a year younger than him.  Three years after settling there, their mother died in the spring of 1860, leaving the Talmadge and Elsbeth to manage the three acre orchard that they now owned. As they sold the fruit from their orchard, they used the money to build themselves a two-room cabin.  Then in the spring of 1865, Elsbeth disappeared into the woods, and was never found or heard from again.

How does that kind of loss affect ones' life?  How does the isolation and loneliness creep into ones' existence?  By twenty years old, Talmadge had lost everyone in his life.  He remained there and gradually built the orchards up into a profitable business.  He went into town every other week to sell his fruit and visit with the few friends he had.  And so he lived for the next thirty-five years.

One day in 1900, two pregnant adolescent sisters stole some fruit from Talmadge's stand at the market in town, and then later the girls began to show up at Talmadge's orchard.  Over time, Talmadge very slowly began to earn their trust.  He began feeding them, leaving plates of food on his porch at first, as the girls would come nowhere near him.  As Talmadge hesitantly began to open his heart to the girls, they also hesitantly began to let him know them.  Sadly, about the time this happens, men with guns show up on the property and the tragedy of the sister's lives explode into even more horror.

I don't even want to share anymore of the story here, because I don't want to spoil the reading of this book for anyone...the book is that good!  The Orchardist by Amanda Coplin is her debut novel and it is outstanding.  As Talmadge becomes involved in the girl's lives and the aftermath, one cannot help but wonder and consider how it played into his emotional upheaval as he recalls his sister's disappearance.  An example of Ms. Coplin's excellent writing:

"He considered those times in life when he had uttered words to a person-Caroline Middey or Clee, or his mother, or a stranger who had long forgotten him-he wished he had never uttered, or had uttered differently, or he thought of the times he remained silent when he should have spoken as little as a single word.  He tried to recollect every word he had ever spoken to his sister, tried to detect his own meanness or thoughtlessness, his own insensitivity to certain inflections she might have employed.. How long ago it was now. At times he fretted about forgetting her, though in fact-he did not like to admit this-he had already forgotten much."


The writing in this book is a pure joy to read.  I can't even imagine how a first time novelist can write like this!

The story is heartbreaking and uplifting and affirming of love in spite of difficult circumstances.  Talmadge is a quiet, unassuming gentleman, who faced the unthinkable and came out of it still as a loving, caring man.  I haven't even begun to give this book the credit it deserves.  Read it....you won't be disappointed!
Posted by Sue F. at 9:14 AM