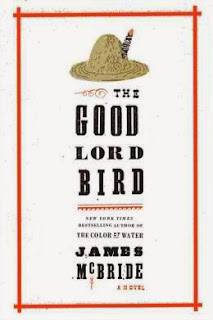 The Good Lord Bird by James McBride won the 2013 National Book Award for Fiction recently.  I have had it sitting on my pile of books to review for awhile.  I read The Good Lord Bird about a month or so ago.  As soon as I had read the previews of it, I knew I wanted to read it, so as soon as it came out I was at the bookstore.  I have been a fan of James McBride's work for several years and I love reading about the Civil War era, so this was right up there in interest for me.

"I was born a colored man and don't you forget it.  But I lived as a colored woman for seventeen years."

Beginning in the first chapter Henry describes his father and the writing is just superb. His father was a barber and a preacher and quite an eccentric fellow.  Henry's mother had died in childbirth when Henry was born.  In the first chapter of the book, the reader is introduced to Henry and his father, and to John Brown.  I was hooked right then.

The book is about the exploits of John Brown leading up to his raid on Harper's Ferry in 1859.  All told from the young Onion's point of view.  Very interesting....certainly made me curious to learn more about John Brown...was he as crazy as the book makes me sound?

One of the passages I really loved was this:

"We spent them hours reading the Bible together in the dusk and discussing its passages.  I come to enjoy them talks, for even though I'd gotten used to living a lie-being a girl-it come to me this way: Being a Negro's a lie, anyway.  Nobody sees the real you.  Nobody knows who you are inside.  You just judged on what you are on the outside whatever your color.  Mulatto, colored, black, it don't matter.  You just a Negro to the world.  But somehow, setting on the bench of that porch, conversating with her, watching the sun go down over the mountains above the Ferry, made me forget 'bout what was covering me and the fact that the Old Man was aiming to get us all minced to pieces.  I come to the understanding that maybe what was on the inside was more important, and that your outer covering didn't count so much as folks thought it did, colored or white, man or woman."


Like I said...great writing.  Clearly a book that I will reread at some point. And very deserving of the National Book Award!
Posted by Sue F. at 8:56 AM