The Kept is author James Scott's first novel.  It's slightly dark, but a very good read.  The author does an excellent job of character development, so that I felt as if I knew the characters. Mr. Scott will be an author whose works I will look forward to reading again. 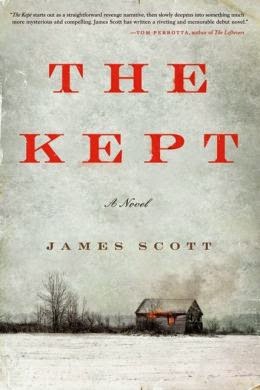 The Kept takes place in the late 1800's in upstate New York.  It opens with midwife, Elspeth Howell, returning to her isolated home in a snowstorm following an extended absence to find that her husband and four of their five children have been murdered. As she searched through the house, she was shot.  Not knowing who was in the house, her twelve year old son, Caleb, had been hiding in the pantry closet and he thought that the three gunmen who had killed his family had returned.  Caleb had been in the barn when the family was killed, saw the gunmen, but was not found by them.  Elspeth was badly wounded and Caleb did the best he could to nurse her back to health, to the point that they could leave there.  Caleb's motive in leaving was to find the three gunmen and kill them.  Before they could leave, Caleb needed to take care of the five bodies that were left.  Because of the weather he was not able to dig in the ground, so he piled the bodies together and set them on fire.  The fire jumped to their home and burned it down also.

Thus began the journey for Caleb and Elspeth.  As they begin their trek through the snowstorms, the author brings in the history...Elspeth had worked in various towns as a midwife, and over the years, had taken each of their five children as newborns to raise as their own. At one point as they traveled, Elspeth casually mentioned to Caleb that he had been born in Watersbridge, the town where they were headed to search for the gunmen.  Why would Elspeth want to take Caleb there?  That is where she had stolen him away.  Perhaps was she trying for atonement in some way?

Once they finally got to Watersbridge, Elspeth disguised herself as a man in order to get a job, and perhaps also, so that no one might recognize her from twelve years ago. Caleb also got a job, working in a brothel cleaning and doing chores.  All the while, Caleb was searching for the three gunmen.  And one day, Caleb was recognized.

The author did a wonderful job with tying up the different stories going on in the novel.  The resolution of it all was sad, but an interesting twist, and seemed quite realistic.  It left me wondering about families and how issues are resolved.  Good book.