All The Light We Cannot See

A beautiful book...All The Light We Cannot See by Anthony Doerr.  It's a big book...530 pages, but 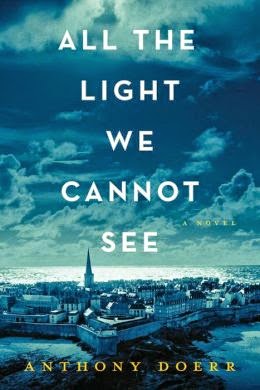 most chapters of the book are one, two, three, or four pages long, so it is an easy book to read.  The only thing to be aware of is that you need to pay attention to what year the chapter is referring to, because that changes frequently.

This is a World War II story about a blind French girl and a German boy and how all the events of the war impacted their lives.  Their paths don't intersect until close to the end of the book, however.


Marie-Laure became blind when she was six years old.  Her  mother had died in childbirth so she lived alone with her father in Paris where he worked at the Museum of Natural History as a master of locks.  Her father made a miniature of the neighborhood so that she could memorize the area and learn to get around.  Marie-Laure was twelve years old when the Nazis occupied Paris.  When that happened, her father took her and they moved south to Saint-Malo where her father had a reclusive uncle living, who took them in. When they left Paris, Marie-Laure's father was given a precious stone to keep safe for the Museum.


Meanwhile, in Germany, a young boy, Werner and his younger sister, Jutta, were living in an orphanage.  Werner was a master at radios, and when those in power learned of his talent he was sent to a special academy to learn more in order to serve Hitler's army.  After awhile, he was given the assignment of tracking the resistance.  And as time went on, Werner began to experience the moral dilemma of what he was doing.

This really is a beautiful book as it examines the cost of war and the impact on good and bad and making decisions. We read this book for one of my book groups and we agreed that although the title may refer to Marie-Laure's blindness, we felt more that it referred to all the good in the world.  Despite this being a book about war, it left one with the sense of goodness.  Quite an achievement!

This sounds really good, Sue! Thanks so much for reviewing it. I'm going to see if my library has it. Did your book club enjoy the book overall?

Yes, Susan, the book group did like this book! It is recommended!