I have loved all of Wally Lamb’s books, and his latest, We Are Water, is no exception.  This is his fifth   It is a big book, as are his others, with many themes running through it, including racism, sexual abuse, love, forgiveness, and grief. 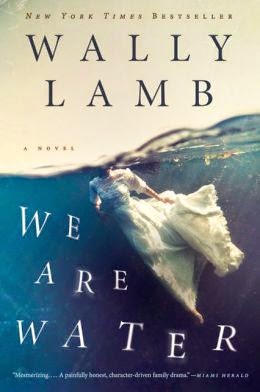 novel and the greatness of his writing carries on!

We Are Water begins with the introduction of the story of Josephus Jones’ who had been found dead in a well in 1959.  Jones was a black artist who had lived in a small cabin with his brother and a white woman.  The rumors were that there was an active chapter of the Ku Klux Klan in that area at the time, and that they had killed Jones.

Years later, Dr. Orion Oh and his family had moved to the property that included that small cabin.  Dr. Oh was a clinical psychologist, and his wife, Annie, was an artist.  They had three grown children.  Annie had fallen in love with a woman, Viveca, her art dealer, and divorced Orion.  When the book begins, Annie is preparing to marry Viveca.  Orion and her three children were left struggling with the fact that Annie was marrying a woman.

Annie had lost her mother and sister in a tragic flood when she was a young girl.  She had been rescued from the flood by her cousin, Kent.  Her father drank and so Annie had ended up spending the rest of her childhood in and out of foster homes.

Each chapter of the book is told by a separate person: it begins with Gualtiero Agnello who was an aging art dealer who had discovered Josephus Jones’ work in the 1950’s. Annie and Orion narrate most of the book, but there are also chapters narrated by Ruth Fletcher who was a widow of one of the members of the Ku Klux Klan, Andrew and Ariane who were two of the Oh’s children, and Kent Kelly who was a cousin of Annie’s.

The book is full of long buried secrets.  I am always fascinated by how the “secrets” people keep affect not only their lives, but the lives of those around them.  Nothing is ever truly secret.  Wally Lamb always does such a great job telling the intertwining the secrets and telling the stories.