Here's a great book to start out a new year! The Night Birds by Thomas Maltman, published in 2007, The Night Birds.  I really wish that we were discussing it at book group, so I may present it again for vote when it is my turn in a few months! 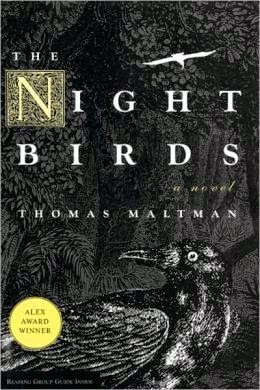 was awarded the Alex Award, the Friends of American Writers Literary Award, and a Spur Award.  I am surprised that I hadn't heard of it until it was presented (but not chosen) at last month's book group. I had voted for it because I thought it sounded so interesting, but another book was chosen.  I still wanted to read it, so after reading the book group choice, I read

The Night Birds is set in the 1860's and 1870's in Missouri, then Minnesota.  It is the story of three generations.  Asa Stenger, a young boy, is at the heart of the book.  He was descended from German immigrants who had settled in Missouri, then moved to Minnesota.  The time period was that of the Civil War and then the Dakota Conflict (or The Sioux Uprising), a fairly unknown time of US history.

In Minnesota during this time period conflicts were still relatively common between the white settlers and the Indians.  However, cordial relationships between the settlers and the Indians were also evident.  One day, Asa's Aunt Hazel, his father's sister, unexpectedly showed up at their home.  She had been thought to be long dead, but as Asa learned, Hazel had been long-forgotten in an asylum for years.  As Hazel and Asa began to trust each other and become closer, Hazel began sharing stories of her past with Asa, including her being taken captive by and living with the Dakota Indians.  Hazel had been institutionalized after the capture and hanging of 38 of the Dakota warriors in 1862.

Hazel's story is fascinating and interweaves history with Indian mysticism, love, loss, and forgiveness.
Her story left Asa with questions and answers that led him onto his path in life.

This is a beautifully written story that I look forward to re-reading at some point.

What are the night birds?  "...birds that led humans out of sorrow."