I had not read any other works by Jojo Moyes, but I may after reading Me Before You.  It was a good 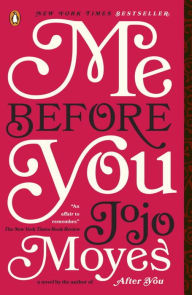 story and made me ponder.

The story is about Louisa Clark, a twenty-six year old, single girl living at home with her parents in England.  She learned that the cafe where she had worked was closing and began searching for another job.  Unfortunately, she did not feel as if she had any marketable skills, other than waitressing.  She was offered a job caring for a young, recently paralyzed man, Will Traynor, and despite her hesitancy, she took the job.  Will had been struggling with accepting that he was a quadriplegic and had made an agreement with his parents to not take his own life for six months.  His parents hope was that Louisa could interest him in life again, so that he would not carry out his suicide. Louisa began planning outing to take Will on in order to help him see what he was capable of.  In the process, Louisa learned what she was capable of doing, too.

It's a charming novel and quite good.  I enjoyed Moyes' writing style and thought processes throughout the novel.  It was a thought-provoking story.