House Rules by Jodi Picult was the December read for one of my book groups.  I had read it several 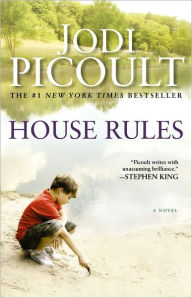 years before, but re-read it for group.  I am usually a fan of her books and this one is no exception.


House Rules is a story about a teenage boy, Jacob Hunt, who was in high school and had Asperger's syndrome. Jacob lived with his mother and his younger brother.  There were several "house rules" that were never to be broken.  One was that the brothers were always to look out for each other.

Jacob was especially interested (obsessed) with forensic science and had a real talent for solving crimes when he watched crime shows.  He was well-knowledged in all that was involved in forensics.  Jacob had a "tutor" to help him with life skills (like learning how to interact appropriately with other people) and she was one of the few people that Jacob tolerated well.  However, she was found murdered.  And Jacob was the last person known to have seen her.  Jacob's interest in all that was involved in solving her murder added to the suspicion that Jacob had murdered her.

This was a really good story and led to great discussion for our group.  However, we all agreed that the repeated information about Asperger's was redundant and distracted from the book.  Other than that....another Jodi Picult success!