These Things Hidden by Heather Gudenkauf is the author's second book.  I did not relate nor care 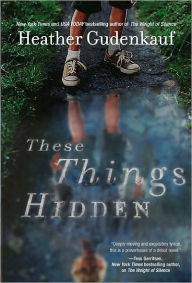 much for the characters in the book.  And the story was half-interesting to me.  I only picked it up to read as I was in-between "good" books to read.  I was hoping for more from this book.

The book is the story of a young high school girl, Allison, who was sent to prison for an undisclosed crime.  She is pretty much written off by her family after that.   Allison had a younger sister, Brynn, who was left to deal with the embarrassment each day as she continued school.

Suddenly, Allison was released from prison and sent to a halfway house in her hometown.  She got a part-time job at a local bookstore and continued to attempt to have some communication or contact with her sister, who would have nothing to do with her.  Brynn was part of whatever happened one night that sent Allison to prison.

As Allison works at the bookstore, things begin to unfold and truths are discovered.

It was an alright read, but not one of my favorites at all.