The Homefront in Civil War Missouri

The Homefront in Civil War Missouri by James W. Ervin is a good overview of how the Civil War 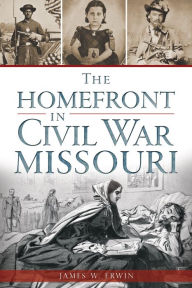 affected Missouri.  I was interested in the book because of my genealogical research that involved members of the family from Missouri who fought for the Confederacy.  This book does a good job describing what it was like on the homefront for the family members left behind while their loved ones were off fighting.  There were marauders, bushwackers and guerrilla fighters everywhere and no one was safe.  Wives and mothers watched as the husbands, sons, and fathers were beaten, or worse.

Below is an example that I have found doing research on my family:

In August of 1863, Richard Douglass was a prisoner at Gratiot St. Prison in St. Louis.  In the Texas County (Missouri) Heritage book it was written about Richard Douglass:

"Was beaten to death with the fire shovel until his brains spilled out by bushwackers at his brother, Andrew's house near Union late 1863.  The women had to bury Richard since the rest of the men had to leave the area."

This book is an excellent resource for anyone researching in Civil War Missouri. It was well-written and easy to read, with lots of resources sited.