I had been anxiously awaiting to read this newest book, Chasing the North Star, by Robert Morgan 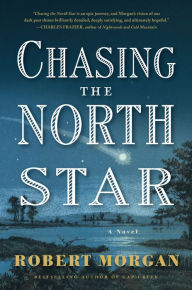 since first reading that he had a new book to publish. While I didn't find it to be greatly written, I did enjoy it.  It seemed a bit like Young Adult fiction, which is not usually what I would chose to read.  That being said, it held my interest and was quite readable.

Chasing the North Star is about an eighteen year old black slave, Jonah Williams, who lived on the Williams plantation in South Carolina in the year 1850.  Jonah had been a "house slave", where he was given more privileges than other slaves, including being secretly taught how to read.  He even was expected to read from the Bible to his mistress.  However, the master of the plantation did not know Jonah could read, so when he came across Jonah reading in the barn one day, the secret was out. Jonah was whipped and he impulsively decided right then and there to run away to the north where he would be free. He stole the only money that his mother had hidden away and left immediately.  He traveled across wilderness and mountains, and along the way, he continually wished that he would have been more prepared, wishing that he had shoes, paper, pencil, coat, etc.

Jonah encountered many difficulties in his journey as he struggled to avoid capture.  Along his way, he came across Angel, a slave who decided she wanted to follow and join Jonah on his quest for freedom.

"It never crossed my mind that he wanted to get away from me so bad he'd just leave the boat and start walking along the roads and trail.  A young girl never thinks a man will leave her."


At first Jonah believed that she would slow him down, but over time it became apparent to him that he might need her. Jonah had a map in his head of how to get to Canada and that included following the North Star.

All in all, a good, but not great read.