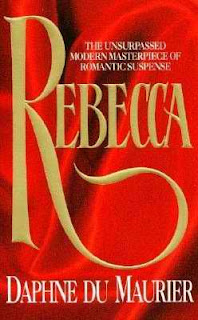 I had not read Rebecca by Daphne Du Maurier for thirty or thirty-five years, but remembered it fondly as a book that I enjoyed.  When my girls book group chose it for one of our classical reads (this year we have been reading a classic book every other month), I was pleased to return to it.  The book felt like an old friend whom I hadn't seen for a long time.  Warm, comforting and still a pleasure!

If there is anyone out there who has not read Rebecca, it is the story of a young woman (interestingly, unnamed in the book) who goes from being a servant/companion to becoming the wife of a handsome wealthy English gentleman.  She met Maxim de Winter in Monte Carlo, where she was traveling with her employer.  It was said that Maxim was traveling in order to remove himself from Manderley, his manor in England, where he had lost his beautiful wife, Rebecca,  to the sea.

The young woman and Maxim began a friendship, that soon turned to a marriage proposal and the couple wed.  After the wedding, Maxim took his new bride home to Manderley.  She was introduced to the housekeeper, Mrs. Danvers, who very quickly made it clear that all would remain as Rebecca had left it.   Everyone talked of the beautiful Rebecca and the parties and dinners and balls that she gave.  The new Mrs. de Winter felt quite inadequate to live up to Rebecca's reputation. Soon, however, things were not as they seemed and the real fate (and nature) of Rebecca became a mystery...

Ms. Du Maurier's writing in this book is beautiful...Immediately the first line of the book was like a coming home:

"Last night I dreamt I went to Manderley again."


My favorite example of Ms. Du Maurier's writing was this:

"We can never go back again, that much is certain.  The past is still too close to us.  The things we have tried to forget and put behind us would stir again, and that sense of fear, of furtive unrest, struggling at length to blind unreasoning panic-now mercifully stilled, thank God-might in some manner unforeseen become a living companion, as it had been before."

Beautiful!  Rebecca is a great old classic mystery!  Not deep, just enjoyable.  If you haven't read it, I recommend it...and if you have, read it again! You will enjoy it either way!
Posted by Sue F. at 11:17 AM