Miss Peregrine's Home for Peculiar Children by Ransom Riggs came out in 2011.  I had no interest in 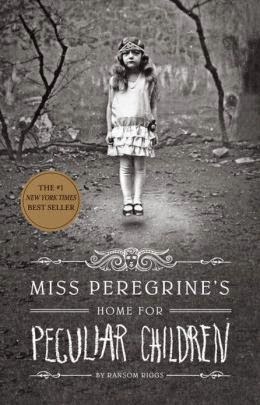 reading it for several reasons; primarily because it is a Young Adult book, and secondly, because it sounded strange.  Well, now I have read it and both reasons seem to fall quite short.  It is a very well written Young Adult book and yes, it is strange, but in a wonderful, interesting way.  I simply loved the book! (**Hint: I loved it even more after I finished the book and read A Conversation with Ransom Riggs at the end of the book...don't miss it!)


Jacob had always grown up listening to and being fascinated by his grandfather's stories of when he (the grandfather) was growing up.  As Jacob grew older, however, he didn't believe the stories.  When Jacob was sixteen years old, his grandfather was killed in front of him.  Jacob became very traumatized and as time went on, his family became more concerned about him. Finally, the family agreed that Jacob could travel to Wales with his father to seek out the orphanage where his grandfather had been sent to live during WWII to escape the Nazis when they invaded Poland.

Jacob discovered the old abandoned orphanage upon his arrival, but soon realized that it was not abandoned.  The same children who lived there when Jacob's grandfather was there were still there, living in some kind of time loop.  The "peculiar children" as they were called each had different and special talents...confirming the stories that Jacob had heard as a child, but no longer believed.  As Jacob came to know the children, he learned more about his grandfather's secrets.

"It was true, of course, what my dad had said: I did worship my grandfather.  There were things about him that I needed to be true, and his being an adulterer was not one of them.  When I was a kid, Grandpa Portman's fantastic stories meant it was possible to live a magical life.  Even after I stopped believing them, there was still something magical about my grandfather.  To have endured all the horrors he did, to have seen the worst of humanity and have your life made unrecognizable by it, to come out of all that the honorable and good and brave person I knew him to be-that was magical.  So I couldn't believe he was a liar and a cheater and a bad father.  Because if Grandpa Portman wasn't honorable and good, I wasn't sure anyone could be."


The story of this book is a very interesting concept...I found myself thoroughly enjoying it, and I am looking forward to reading the sequel.  The characters were well-developed and the story held my interest through-out.   It reminded me a bit of the Harry Potter series.