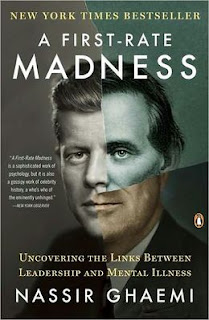 A First-Rate Madness by Nassir Ghaemi is also titled as "Uncovering the links between leadership and mental illness"  I was, of course, attracted to the title and was curious to read it.  Dr. Ghaemi is a professor of psychiatry at Tufts University.  In the book he examined the lives of General William Sherman, Ted Turner, Winston Churchill, Abraham Lincoln, Gandhi, Martin Luther King, Franklin Roosevelt, John Kennedy, and Adolf Hitler, and touched upon some other leaders as well.  As you might guess, his premise is that they all suffered from mental illness.


I did not care for the book.  Based on my own clinical experience, I think that most (probably all) of us have some degree of any number of "disorders", just as the many disorders have great ranges of severity.  The labeling of those described in the book made me uncomfortable.  While I don't doubt that they had the disorders, I don't buy that the disorders made them leaders, or that the disorders necessarily affected their leadership and decisions.  Possible? yes, of course.  Definitely? no.