In the Sanctuary of Outcasts 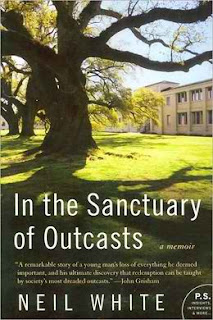 I loved In the Sanctuary of Outcasts by Neil White.  It is a non-fiction book, a memoir actually, about White's year spent in prison in Louisiana.  The odd thing is that for several years, the prison also doubled as a community for people with leprosy.  White was a successful early 30's business man living "the American Dream" with money, family, fame, seemingly having it all.  However, he was in over his head and began kiting checks to cover his bills.  It caught up with him.   He was sentenced to a year and a half in prison and lost everything.


White was sent to Carville, a prison in Carville, Louisiana, that had been a sugar plantation at one time, then became The Louisiana Leper Home in 1894. It was only from 1991 to 1994 that the Home was also used as a minimal security prison. The former residents still remained living there, also.  And it was these residents who changed White forever.  As he began his sentence, he assumed that he would quickly serve his time, then return to his wife and children and begin again to build his life.  But as he began to get to know some of the residents who were living there and had lived there for years (some for most of their lives) he began to understand that there is much more to life and money and success (as he had defined it).  The dignity and wisdom of those living with leprosy began to sink into him slowly, and life began to change.

This is a beautiful, thoughtful book that seemed like a privilege to read.  I am thankful for White writing this book, and thankful for the friend who recommended it (thanks, Chrissy!).