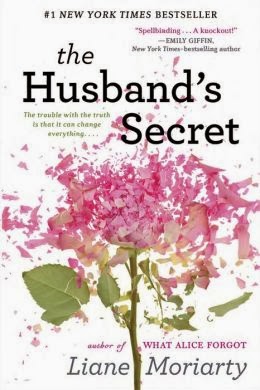 I don't believe that I have read any other books by Liane Moriarty, other than this one being reviewed-The Husband's Secret.  Based on The Husband's Secret, I look forward to reading some of her other works.  My daughter lent me this book and I was happy to read it since I had noticed it was one of the finalists for the 2013 Goodreads Choice Awards.

The book centers around three different women and their individual stories, which I had a hard time with through the first part of the book, trying to keep them straight and trying to figure out how they tied together. That is probably my only criticism of the book, but it worked itself out for me by about the middle of the book.

Cecilia, who I consider the main character of the book, was a 40 year old, married, mother of three daughters, who worked part-time selling Tupperware and volunteered wherever needed in Sidney, Australia.  She was married to John Paul, one of the handsome Fitzpatrick boys.  Cecilia was beginning to notice some changes in John Paul and was a bit concerned about the relationship.  When John Paul was gone on a business trip, Cecilia was cleaning out the attic and came across an old sealed letter inside a book that was addressed

"For my wife, Cecilia Fitzpatrick
To be opened only in the event of my death"


Meanwhile, Tess' husband, Will, revealed that he had fallen in love with Tess' cousin/best friend.  So Tess decided to take her young son and go visit her mother in Sidney for an undetermined length of time.  When Tess arrived in Sidney, she decided to enroll her son in school-the same school where Cecilia's daughters attended.  It turned out that Connor, the adored PE teacher at the school, was an old boyfriend of Tess' and they immediately became involved upon coming across each other when Tess moved back.

The secretary of the school was Rachel, a widowed older woman whose 17 year old daughter had been murdered back in 1984 and the crime had never been solved.  Connor had been Rachel's daughter's boyfriend at the time of her death.  Rachel had always believed that Connor was her daughter's murderer, and that she would someday be able to prove her theory.


Yes, I know that this is all rather confusing...that is how I felt for awhile reading the book.

But...the author does an excellent job getting into the characters of the book and their lives.  Each of the
three main characters were well-developed and it was interesting to see how the book wove together the struggles that each of the women were dealing with.  Lots of old secrets revealed, which I always find entertaining to read.  The author also weaved in the history of the Berlin Wall (which her daughter was studying) and the subtle comparisons of that history to what was going on in the book was interesting.

Yes, if you are wondering, Cecilia opened the letter up and read it, not waiting for John Paul's death.  The contents changed everything for their relationship, and for many other people.  And I have to admit, I had not guessed the content.

Good, good book.  It will be one that I will recommend to my book groups!