At the Water's Edge

I read that At the Water's Edge is Sara Gruen's fifth novel.  I only know of her from Water for 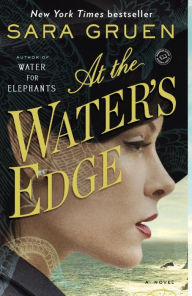 Elephants, which I had read for one of my book groups some time back. I had found it to be good, but not great.  I picked up At the Water's Edge from the library.  I'm glad that I didn't buy it.

The story was about three privileged people, Madeline, her husband Ellis and their best friend Hank.  World War II was going on (it was 1945) and both Ellis and Hank had gotten out of serving in the military.  Ellis and Hank decided that they wanted to go to Scotland to locate the Lock Ness monster, which Ellis' father had unsuccessfully attempted thirteen years before.  They crossed the ocean despite the war going on and arrived in the small village of Drumnadrochit without lodging, ration cards or anything needed for their search.  The trio came across a small inn to stay and quickly made themselves quite disliked, as they expected to be waited upon, etc.  Hank and Ellis disappeared for days, sometimes weeks, at a time, leaving Maddie at the inn.  Maddie became friends with the people working there and with the owner.  As time went on, Maddie began to suspect secrets and her perceptions of life as she knew it began to change.

I kept hoping for the book to get better, but it never did.  Oddly, it kept reminding me of a F. Scott Fitzgerald story (think Great Gatsby, war, etc.), but the writing was not reminiscent of Fitzgerald.
In all, I found the book to be disappointing.